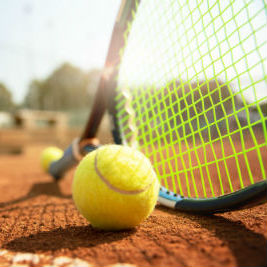 Tennis is a sport that can be enjoyed by everyone, from young to old, singles to couples, novice players to aspiring professionals. While you may never be able to hit a backhand shot as fierce as Rafael Nadal, tennis is a highly inclusive sport practiced by all skill levels. It is fairly easy to join, as there is little equipment required apart from a lightweight racquet, tennis balls, and some comfortable shoes. Not to mention, there is a myriad of health benefits and valuable lessons to be learned from playing the game. Consequently, for those of you interested in picking up a racquet, there is little stopping you and much to be gained.

The heart is one of the most essential organs, responsible for carrying oxygen and nutrients to every cell and organ in the body. Promoting optimal heart health is essential for a person’s overall well-being and reduces the risk of developing cardiovascular diseases. Playing tennis is considered both an aerobic and anaerobic exercise. Aerobic workouts are performed for a sustained period and are perfect for burning fat and maintaining high energy levels.

Depending on the pace set by players, a match typically lasts one to two hours, with some grand slam tournaments lasting much longer. In contrast, anaerobic exercise involves quick surges of energy followed by rest. In tennis, players are required to sprint across the court, hit overhead shots and volleys, all of which require intense bursts of power. As a result, says Nyberg, playing tennis can significantly strengthen your heart while lowering the risk of a heart attack, heart disease, and stroke.

Neurons are specialized cells that process and transmit information between the brain and other nerve cells or muscles. To send messages to different parts of the body, connections develop between neurons to facilitate communication. The stronger the connection between neurons, the faster the messages are delivered. When you repeat a movement several times, the neural connections associated with that action become stronger. For instance, tennis demands critical reasoning combined with fast movements. When repeated numerous times, this leads to the strengthening of tactical, agility, and coordination centers of the brain.

During a match, says Nyberg, players must make near-instant decisions concerning the angle at which they will hit the ball to outwit their opponent. Also, studies indicate that sports requiring substantial thinking skills can lead to improved memory function, learning, social skills, and behaviour.

According to the National Institutes of Health, bone mass will grow to its full potential by the time an individual reaches age 30. At this point, bones will have reached their maximum strength and density, also called “peak bone mass.” In general, an individual’s bone mass will remain stagnant until it begins to decline around age 40. However, research shows that children and young adults who participate in regular activity will be able to achieve higher peak bone mass. Moreover, adults over the age of 30 can minimize bone loss by incorporating more fitness into their routine. The NIH promotes tennis in particular, as it is a weight bearing exercise that forces the body to work against gravity.

Tennis is a full-body workout that requires players to move around the court and strike a ball with considerable force, notes Nyberg. These repetitive movements lead to enhanced forearm, core, and back muscle strength. Consider elite tennis player Serena Williams; her years of practice have allowed her to develop a muscular physique that enables her to hit extremely powerful serves.

Mental health is just as important as an individual’s physical health. While you are playing tennis, the brain releases feel-good chemicals to help regulate mood, including endorphins, dopamine, norepinephrine, and serotonin. The combination of these hormones helps to promote positive emotion and relieve pain and stress.

For tennis players, the court becomes a ‘safe haven’ where individuals can let go of their everyday worries and anxiety. According to Southern Connecticut State University, tennis players scored higher in self-esteem, vigour, and optimism than other athletes and non-athletes who participated in the study. At the same time, they also scored lower for evidence of confusion, tension, anxiety, and depression. While tennis does wonders for a person’s overall mood, it can also lead to enhanced body image as players’ physical appearance begins to strengthen.

Nyberg on Flexibility, Balance, and Coordination

Tennis requires coordination of different muscle groups throughout the body. To effectively swing a racquet, a person’s feet, arms, hands, and torso must all work together. As a result, each swing requires a certain amount of flexibility, balance, and coordination. Through regular tennis practice, a person will be able to achieve greater flexibility, as individuals must constantly stretch their muscles during gameplay. Those who possess greater flexibility will be less likely to get injured on the court due to their wider range of motion. Frequent tennis players will also experience improved balance, as they must constantly start, stop, and change direction to keep the ball in play. Consequently, playing tennis leads to enhanced agility, flexibility, balance, and coordination.

Overall, scientists from various disciplines recommend tennis for its vast number of health benefits, even deeming it the “sport for a lifetime.” So, whether you are five or 75, it is never too late to pick up and racquet and hit the court, says Nyberg.