‘Open for business’ at the Mill 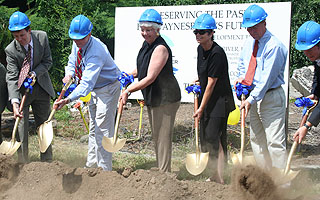 “Today is to announce that South River is open for business,” said Michael Bryan, an attorney for South River Inc., the development company owned by Winchester-based developer Beverly Shoemaker, who has been working on plans for a $45 million repurposing of the old Crompton Shenandoah plant in Waynesboro into a mixed-use office, commercial and residential development.

The site was formally rechristened Tuesday as the Mill at South River with a groundbreaking ceremony involving Shoemaker, her planning team and city officials.

The location off Arch Avenue adjacent to Downtown Waynesboro is currently home to a collection of warehouses and spaces used by a mix of artisans including metalcrafters, glass-blowers, potters, sculptors and steeplemakers.

Shoemaker and her team are hopeful that they can build out from that base to find entrepreneurs with similar interests who want to set up shop in the vicinity of downtown.

The site has also been discussed as a possible location for the proposed Center for Coldwaters Restoration, a fish hatchery and research center that is emerging from a collaborative effort involving state and federal officials and several Virginia colleges and universities.

“This project represents a pivotal point in Waynesboro’s history,” Mayor Tim Williams said. “In the 20th century, the Crompton Shenandoah facility was a major employer and economic force in the c city when Waynesboro was literally an industrial powerhouse in the Valley. Beverly and her team have imagined a future where this property represents a new economic vitality. I believe the city can also a new future and a new economy.”