Suicide is the tenth leading cause of death in the United States. Yet many people affected by suicide don’t talk about it, afraid of making others uncomfortable by bringing up the subject. 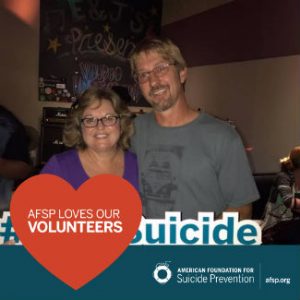 They may also think there is nothing they can do to prevent it from happening to others. But the research shows us otherwise. Suicide can be prevented, and there are things everyone can do in every community to help stem this tragic loss of life.

Today the nation’s largest organization dedicated to the fight against suicide, the American Foundation for Suicide Prevention, recognizes Kim Sours for her contributions to helping to prevent suicide in the Greater Augusta community.

“We are enormously thankful for the suicide prevention work Kim Sours does every day of the year, which is why during National Volunteer Appreciation Week, we publicly share our gratitude for her contributions to the cause.  In this world, where it can seem as if we read nothing but negative headlines every day, it’s important to remember that there are everyday heroes like Sours who give their time, resources and gifts to trying to make positive change for the Greater Augusta community and beyond,” said Robert Gebbia, the CEO of the American Foundation for Suicide Prevention. “It’s through her work, and the efforts of others like her, that we will achieve our bold goal of reducing the annual suicide rate in the United States 20 percent by the year 2025.”

Sours has dedicated countless hours this year to helping to educate the residents of Staunton about suicide prevention and the importance of seeking mental health support. She has given her time to an important cause that will lead to lives saved and hope for those affected by suicide. Sours is leading her third Out of the Darkness Walk in Staunton on October 21. She works tirelessly throughout the year to organize fundraisers for the Walk and plan with her volunteer committees. For more information on the upcoming Walk, visit afsp.org/GreaterAugusta.

AFSP continues to need volunteers. Find out how to get involved in this important lifesaving work by contacting your local AFSP chapter at afsp.org/Virginia.

About the American Foundation for Suicide Prevention

The American Foundation for Suicide Prevention is dedicated to saving lives and bringing hope to those affected by suicide. AFSP creates a culture that’s smart about mental health through education and community programs, develops suicide prevention through research and advocacy, and provides support for those affected by suicide. Led by CEO Robert Gebbia and headquartered in New York, AFSP has local chapters in all 50 states with programs and events nationwide. AFSP celebrates 30 years of service to the suicide prevention movement. Learn more about AFSP in its latest Annual Report, and join the conversation on suicide prevention by following AFSP on Facebook, Twitter, Instagram, and YouTube.