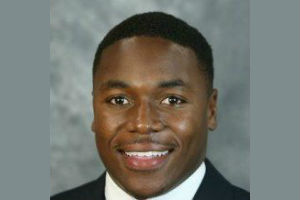 Virginia wideout Joe Reed could sneak his way to Day 2 of the upcoming NFL Draft, with most mocks having him go on Day 3, but his impressive NFL Combine showing could be a boost.

With scouts and execs not able to get any kind of additional looks at players, Reed might not have to worry about sliding.

“I’m kind of in a weird position. You know, it really depends on what a team wants, what a team sees in me,” said Reed, who is also getting some consideration from teams looking for running backs.

The 6’1”, 215-pounder didn’t play in the backfield at Virginia, where he racked up a team-leading 77 receptions in 2019, and also led the nation in kick returns, averaging 33.2 yards per return this past season.

You can see why Reed shouldn’t have much to worry about as the draft approaches.

If nothing else, his ability to contribute on special teams right away should make him a value pick.

“As a rookie, special teams is important. That’s just the way it is,” Reed said. “You know, it’s always great to be a one or a two. But sometimes, you know, to get your foot in the door, you have to play special teams, and I’ve been gifted with the ability to return kicks.”

He’s getting plenty of interest from teams in the walkup to the draft, participating in around a dozen FaceTime interviews with team representatives to this point.

Among wideouts, he has above-average speed (running a 4.47 40-yard dash at the Combine, faster than the average for the receiver position) and standout power (21 reps at 225 pounds on the bench, third-best among receivers), and both of those numbers would have been top 10 among running backs as well.

He was looking forward to improving on those numbers at the scheduled April 8 pro day at UVA, but obviously that event has been scuttled due to COVID-19.

The focus in the here and now for Reed is on staying in shape. He has access to some free weights, exercise bands and “a couple of kettlebells” that he’s able to use in the parking garage of his apartment complex each morning.

“Do that for about an hour and a half, then we walk over to Mad Bowl and get some field work. We’ll throw, do some conditioning, do some speed work, and you know, just kind of do what we can right now,” Reed said.

“It’s kind of unfortunate that we didn’t have pro day, didn’t have any workouts,” Reed said. “You know, our business got cut short. So now, you know it just comes down to you know, staying in shape, you know, being able to, you know, be professionals and work out on our own and you know, just keep the faith and see what happens.”