Is it true that Apple gets around U.S. labor standards and laws by outsourcing production to China? 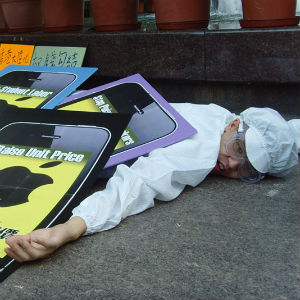 Dear EarthTalk: Is it true that Apple gets around U.S. labor standards and laws by outsourcing production to China?
— Josie Walsh, New York, NY

Apple isn’t the only tech giant outsourcing much of its production to Chinese manufacturers nowadays, but the sheer popularity of the California-based company’s products makes it an especially easy target for activists concerned about worker health and safety. China Labor Watch and other groups have exposed inhumane conditions at huge Chinese factories of suppliers like Foxconn and Pegatron that support many U.S.-based tech firms. Workers at these facilities, many who are underage, are often required to work 18-hour shifts and are routinely exposed to toxic chemicals—but still can barely make ends meet. The problem came to a head in 2010 when journalists got word that 14 workers had committed suicide at Foxconn’s massive iPhone-assembly manufacturing facility in China.

Another issue dogging Apple’s Chinese partners is worker exposure to toxic chemicals and a higher than average incidence of leukemia among employees. Apple agreed to discontinue using two of the worst offenders, benzene and n-hexane, after the non-profit groups China Labor Watch and Green America collected upwards of 40,000 signatures from consumers demanding action from the company. But China still allows its manufacturing sector to use several other carcinogenic chemicals long outlawed in the U.S. and Europe. Repeated exposure to these substances is another threat Chinese workers have to contend with when working on the assembly line making smartphones and other tech gadgets.

​Despite knowledge of the dangerous conditions, Apple’s Chinese suppliers rarely struggle to find workers, many of whom are willing to take the relatively high paying jobs despite the risks—especially if they are supporting loved ones at home who depend upon the extra money to survive. China’s huge population creates an infinite supply of workers, such that even a large-scale walkout would be pointless. The assembly line system gives each person a repetitive, simple job that can be taught in an hour.

For its part, Apple continues to claim they are investigating the situation and doing everything they can to ensure satisfactory working conditions. In 2010, the company revamped its supplier responsibility standards and threatened it would terminate relations with Chinese manufacturers that refuse to toe the line, and also called for new audits on all of its “final assembly” facilities in China. Two years later, Apple became the first technology company admitted to the Fair Labor Association, a non-profit that conducts independent monitoring and verification to ensure acceptable workplace standards. While this affiliation doesn’t mean Foxconn, Pegatron and other Chinese high tech suppliers are beholden to standards as stringent as U.S. labor laws, activists consider it a step in the right direction and continue to keep an eye on the situation.

Of course, whether or not Apple steps up on the issue may depend more on if consumers are willing to forego the company’s products due to worker exploitation issues. And that’s not likely to happen anytime soon, as Americans and others continue to buy iPhones, iPads and Macs as fast as Apple and its Chinese partners can produce them.

EarthTalk® is produced by Doug Moss & Roddy Scheer and is a registered trademark of Earth Action Network Inc. View past columns at: www.earthtalk.org. Or e-mail us your question: editor@earthtalk.org.