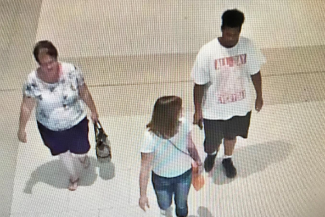 The Harrisonburg Police Department is seeking assistance from the public to identify three unknown subjects believed to have committed fraud on Aug. 10.

The victim reported that her wallet was lost while at a yard sale in the New Market area. Her card was then used at several stores in the Harrisonburg area.

Pictured are three subjects from surveillance footage using the victim’s cards. The younger female may be indentified by a unique tattoo on her left forearm. She is seen with another female, possibly in her 50s with short hair, and a third subject described as a tall black male in his 20s.

The subjects were found to be travelling in a dark navy-blue Chrysler minivan at the time of the offenses.