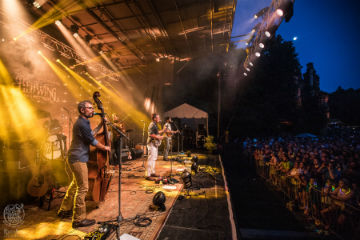 The Red Wing Roots Music Festival has released the full lineup for the July 10-12 event at Natural Chimneys Park in Mount Solon.

In addition to festival hosts and local favorites, The Steel Wheels, festival headliners include The Mavericks, Sarah Jarosz, Billy Strings and Asleep At The Wheel.

Visit the full line up at www.redwingroots.com/2020-line-up.

Since it began in 2013, Red Wing has emphasized great music, great food and great fun for the entire family in the great outdoors. This year, the festival will once again feature musical performances on five stages, along with the region’s finest food trucks with options for craft beer, cider, and wine.

Outdoor activities include a kids’ climbing wall and play area, organized bike rides and group runs, as well as morning yoga sessions beneath the rock towers at Natural Chimneys Park.

On-site camping has long been an extremely popular aspect of the festival, with some options already sold out. This year’s Red Wing will feature a new on-site lodging option on Chimney Ridge: luxury glamping in canvas tents by Solid Ground Shelters, on sale now on the festival’s ticketing page. Also new for this year, the Chimney Ridge camping area will have improved transportation options to the festival venues, trails down to the park, and facilities up on the ridge.

As in recent years, festival tickets have been selling quickly. Less than 1,000 three-day tickets are still available. A limited number of single-day tickets will go on sale the first of June and likely will not last long.