Hanger is being challenged by Culpeper County party activist Tina Freitas for the GOP nomination in a June 11 party primary.

Hanger was first elected to the 24th District Senate seat in 1995.

Allen’s statement on his endorsement of Hanger: 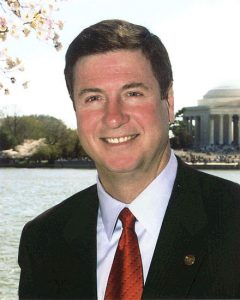 This is former Governor George Allen. I am happy to announce my endorsement of Senator Emmett Hanger. Emmett Hanger is a longtime friend who I know as a friendly, common sense conservative.

Sharon and Emmett live their lives by the Golden Rule. As a legislator Emmett works hard, listens and then works to achieve the best solution for the people of his district and Virginia.

Emmett is currently a leader on crucial issues that are important to me and our beloved Virginia.

I strongly believe that we must end political gerrymandering where political party operatives divide communities and precincts to create far flung districts that look like spaghetti thrown on a map. In our representative democracy, the people should choose their public servants, rather than politicians picking their voters. Emmett listened to the people and colleagues to devise a citizen and bi-partisan legislative panel to rationally draw Congressional and state legislative districts.

Emmett stepped out early on this vital issue and is leading the way for passage of a Constitutional Amendment here in Virginia. If this Amendment is passed again next year and then ratified by Virginia voters in November 2020 we can make the redistricting process work well and keep Federal judges from intervening in the process.

Emmett has also been focused on keeping the regulatory climate in Virginia favorable to entrepreneurship and job growth. The successes of the past several years with economic wins involving companies like the $1 billion expansion of the Micron semiconductor manufacturing facility that we first recruited when I served as Governor, plus the Amazon HQ Win and expansions in the Valley of appreciated Merck and Hershey are evidence of our competitive business climate.

Emmett was at the table when those deals were negotiated and approved. Just like when I had the honor of serving as your Governor, I focused on making sure that the world knows that “Virginia is open for business.” Emmett is carrying on that essential mission to make certain Virginia is the best place to live, learn, work and raise our families.

I am confident that if re-elected, Emmett Hanger will continue to work hard to protect the values and goals that are important to you and our fellow Virginians. My wife Susan joins me in endorsing our good cheerful friend, Emmett Hanger.