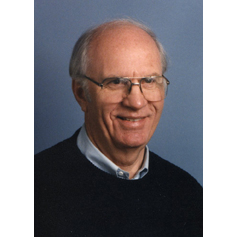 Brunk was born May 19, 1931 in Washington, D.C., the son of the late Truman and Ruth Smith Brunk. He grew up in the Denbigh community of Newport News, Va.

Brunk joined the EMU faculty in 1965 following his ordination and served as campus pastor 12 years. He was chair of the renovation committee for major renovations to Lehman Auditorium in the mid-1970’s. Brunk then served briefly as director of college relations, overseeing the areas of church, alumni and media relations and annual and special giving.

Brunk will be remembered by many for his leadership in the “miracle library drive” of early December, 1969, working with EMU students who raised $111,000 in four days of fund-raising to rescue the threatened building project. The Sadie Hartzler library was completed and dedicated in the fall of 1971.

“Truman Brunk was a very special brother among us, highly regarded by faculty and students for his gracious understanding and caring spirit,” said Myron S. Augsburger, who became EMU president in 1965. Brunk was the first faculty member Dr. Augsburger hired that year. “I thank God for his service at EMU and for his extended ministry in a series of significant pastorates. Many have been blessed by knowing him as a friend and an enriching brother.”

Brunk is survived by his wife of 58 years, Elizabeth (Betty) Shenk Brunk; a daughter, Kathleen Brunk Isaacs of Morrisville, N.C.; a son, Donald Wayne Brunk of Souderton, Pa.; four grandchildren and two great-grandchildren. He is also survived by two sisters, Evelyn Hertzler of Newport News and Sandra Steiner of Harrisonburg, and a nephew, Steve Brydge of Harrisonburg. A sister, Margaret “Peggy” Brydge, is deceased.

Brunk was the author of two books of stories growing out of 40 years of pastoring and mentoring – “That Amazing Junk-Man” (2007) and “The Singing Junk-Man” (2010), published by Cascadia Publishing House, Telford, Pa.A memorial service was held Sunday, Oct. 10, at Lindale Mennonite Church with internment in the Lindale church cemetery.

Memorial contributions may be made to Eastern Mennonite Seminary, 1200 Park Road, Harrisonburg, VA 22802.