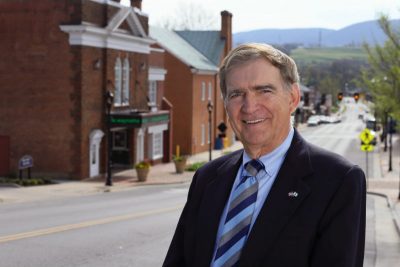 It’s not often that I agree with George Allen on something, other than UVA Football, but we agree that Emmett Hanger is the best candidate to represent the 24th Senate District in Richmond.

And I’m not saying that just for the June 11 Republican Party primary – which, June 11, that’s this coming Tuesday, a couple of days, from this writing.

Hanger is facing an intra-party challenge from Tina Freitas, a Culpeper County GOP activist, who seems like a nice enough person, but she’s letting her campaign play awfully dirty politics with respect to this primary.

I’m a lifelong Democrat, and a progressive one at that, which I mention as preface to, I’m backing Hanger all the way through to November.

Hanger has my support, first and foremost, because has been on the right side of the healthcare debate in Virginia, from the beginning.

While Republicans fought Terry McAuliffe and then Ralph Northam over Medicaid expansion, playing politics with people’s lives, Hanger was among the leaders in the Senate pushing for the expansion, which ultimately extended coverage to more than 400,000 low-income Virginians.

Hanger has also been a leader on strong state support for public education, again, running counter to the tide of the mainstream of his party, and in supporting non-partisan redistricting, patroning a bill that would establish a citizen-directed redistricting commission.

What also makes Hanger the best choice, to me, is that he has demonstrated a willingness and ability to be able to work with Republicans and Democrats to get things done, which, novel concept, I know, in this day and age of posturing posing as politics.

Freitas, on the right, and Hyde, on the left, seem to me to offer more of the same of that kind of politics that isn’t working.

And if we get a Freitas-Hyde matchup in November, that’s what we’ll be left with – the choice between two candidates who we can be pretty sure will be more focused on the politics than getting things done.

In Virginia, you don’t have to be a party member to be able to vote in a party primary – because in fact, you don’t register party affiliation when you register to vote.

This is why those in the political middle and center-left in the 24th Senate District who agree with me that Hanger is the best candidate in November need to get themselves mobilized for this coming Tuesday.

You can vote on Tuesday, and again, if you agree that Hanger is the best candidate, you need to vote this Tuesday, because if you don’t, we might be reduced to a choice of the lesser of two ideologues come the first Tuesday in November.