Another day, another bobblehead: Ovechkin gets the honor 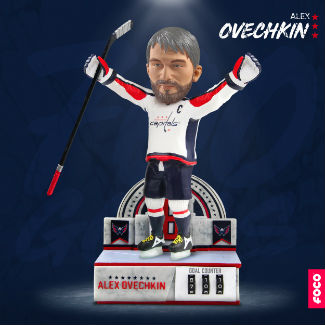 FOCO is trying to brighten us a bit with another bobblehead, this one featuring Washington Capitals superstar Alexander Ovechkin.

The bobblehead includes an adjustable goal counter to track Ovechkin’s career goals, the second such bobblehead FOCO has released.

This Alexander Ovechkin Washington Capitals Celebration Goal Counter Bobblehead depicts Ovechkin in a celebratory pose in front of a backdrop modeled after the Capitol Building with a bold jersey number display and team logo banners, as well as a front name display.

This bobblehead is handcrafted to depict a superstar player that Capitals fans be cheering on for years to come. It stands approximately eight inches tall, making this the ideal addition to any collection at home, or any desk at work or school.

“We were stunned and excited by fans’ overwhelming enthusiasm for our initial Ovechkin goal counter bobblehead launch, which led to a quick sell-out,” said Matthew Katz, Senior Licensing Manager at FOCO. “We wanted to give even more Capitals fans the opportunity to add this unique concept to their collections, so we immediately got to work on this, the second Ovechkin goal counter bobblehead,” Katz continued.

This bobblehead is available for pre-order at this link now for $45.00. The projected delivery date to customers is in June.