The driving forces behind war planning in Washington are power, domination, profit, politics, and the inertia of war planning as a path toward career success. These sociopaths are happy to bomb Germans or Yugoslavians. The value they place on sailors in Pearl Harbor or contemplated victims of Operation Northwoods, or U.S. troops stop-lossed into insanity is negligible. They don’t think twice about overthrowing a democracy in Iran and laying the groundwork for Islamic power. They have no qualms about arming Muslim radicals in Afghanistan or Iraq, and toppling secular governments in Iraq or Libya or Syria. That most ISIS weaponry is U.S. weaponry seized from Iraq can only please the profiteers who will sell the weapons to combat ISIS. Their best friends are the killer Muslims running Saudi Arabia and nearby kingdoms. Their Christian hatred for Islam is as real as Karl Rove’s integrity or Donald Trump’s hair.

But you can’t keep dumping $1 trillion a year into U.S. militarism without an enemy as frightening as — actually it has to be more frightening than — the Soviet Union and nuclear holocaust. In the irrational world of fear, a throat slitting is as frightening as a nuclear bomb, in fact more so. Many, many people in the United States, when they stop to think about it, recognize that the wars of recent decades have been counterproductive, creating enemies rather than eliminating them, endangering rather than protecting, costing a mountain of lives and of dollars, savagely destroying the natural environment, eroding civil liberties in the name of wars for “freedom,” and brutalizing morality, justifying murder, torture, kidnapping, etc. But with fear and hatred of Muslims thrown into the mix, all of that clear understanding is erased by the need to kill Muslims. Suddenly a rich stew of World War II myths and Hollywood entertainment reminds everyone that only war works and nothing else is acceptable.

Donald Trump didn’t vote for the war on Iraq that killed a million Muslims. He didn’t vote to fund it and escalate it over and over again. Hillary Clinton did that. Which is not to say that Trump wouldn’t have done so too, or worse, if he thought it would get him on TV more. The point is that the hatred is not new. Without it, basic U.S. policy would be understood as irrational.

There are now news stories from around the United States and the world about people shunning Trump businesses and expressing fear about living in Trump-branded buildings. They’re concerned that there may be an attack. No doubt among those expressing this worry are some of that majority of Americans who tell pollsters they want more war. So, they recognize blowback. It’s not a difficult concept. Hostility toward others produces hostility back toward you or someone taken to represent you. Pretty basic. But in advocating more war, millions of people are willing and able to hide their understanding of blowback in some fascist vault in a back corner of their brains. Sure, more war will produce more blowback, they may think, but hopefully it will hit somebody else — especially if I unload my Trump condo and live somewhere else, perhaps a liberal gated community with an African-American guard whose name I even know.

The Wisdom of the Free Speech Wall 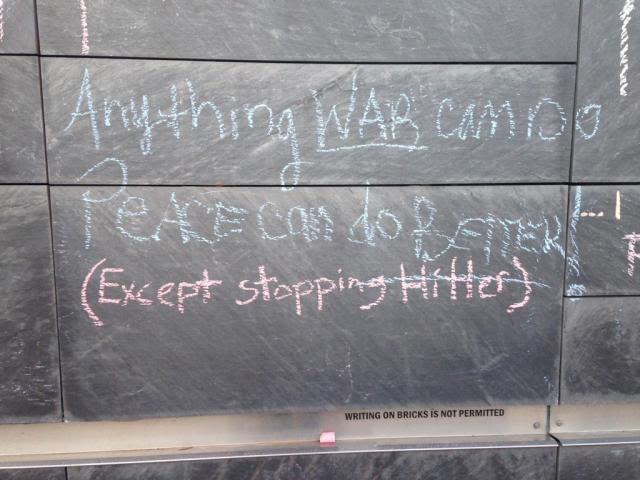 I walked by a wall recently and took a photo of it. Someone had written “Anything war can do, peace can do better.” Wisest thing I’ve ever seen on that wall. But someone else had scrawled underneath a poetic piece of pure ignorance from deep within the terrified soul of U.S. paranoia: “(Except stopping Hitler!)” I don’t think the rest of the world finds it easy to get inside this type of U.S. thinking, in which the outside world is full of a menacing evil constantly analogized to Hitler, the “new Hitler,” the “modern Hitler,” — and Hitler is understood as having arisen with no help from the Treaty of Versailles, no help from Wall Street, no assistance from the militarism of Western culture, and no possibility of being halted short of global domination except by massive violence.

Kids, dear world, in the United States, you should know are compelled to pledge allegiance to a U.S. flag every morning, and then to pray in what they call a “moment of silence.” They are then taught a mythologized U.S. history year after year with hardly any mention of the other 96% of humanity. Then they’re told that Muslims want to slit their throats. Why? What did they do? Nothing. They’d just been shopping and watching football and minding their own business. They had a flag out front and plenty of support-the-troops shit stuck to the SUV. Why? Must just be the barbarity of the Muslims. Why not kill them off? It worked with the Native Americans. Kill them off, but don’t talk about it like that out loud.

Only, if there’s a war on al Qaeda support it, and if there’s a war with al Qaeda against Syria oppose it, and if it’s repackaged as a war on al Qaeda under a new and even scarier name, support it with a passion. And if killing them is OK, what in the hell is all the fuss about over torturing them? And if torturing them is OK, what in the world could be wrong with denying them entry into the United States? This is the logic of war propaganda. Trump agrees with the Washington establishment, he just has some sort of media-driven Tourette syndrome that leads him to blurt things out. If he’s made president, the second most dangerous place in this country will be a mosque. The first will remain anywhere between Trump and a television camera.