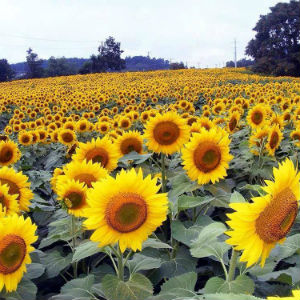 In 2014, the Frazier family planted a field of sunflowers along well-traveled Route 33. They didn’t quite anticipate the impact of the flowers on passers-by, who stopped cars, gawked, took photos and trespassed to enjoy the unique sight.

Now the Fraziers and their business, Frazier Quarry, are turning that wonder into a fundraiser for Walk for Hope, an event close to their hearts.

The field, located at the junction of Jim Britt Way and Va. 33 east of Harrisonburg, will be open from 8 a.m.-8 p.m. on Saturday, Sept. 3, for flower picking and photos. A donation of $5/bundle is suggested to benefit Walk for Hope.

Each spring, Walk for Hope draws area college students and community members together to raise awareness about mental health, depression and suicide among college-age youth. The event was founded and funded by Bibb and Dolly Frazier, who lost their son, Austin, in 2009 after a long battle with bipolar disorder.

Sturdy, close-toed shoes are recommended, as are a set of pruners. Sunflower stalks can be tough, says Mike Frazier, the company’s health, safety, and environmental coordinator. “Pick a few, give one to a loved one, a friend, or a complete stranger. Spread the love because you never know just how much that flower can mean to someone.”

The Fraziers request that vehicles do not stop or park at any other time because of safety on the heavily trafficked road and out of respect for neighbors.

The Austin Frazier Memorial Fund honors Austin, who was a junior at James Madison University when he died in 2009.

In 2010, the Frazier family helped to start an innovative mentoring program at EMU called CoachLink, in which trained adult mentors are paired with students in informal and supportive coaching-style relationships.