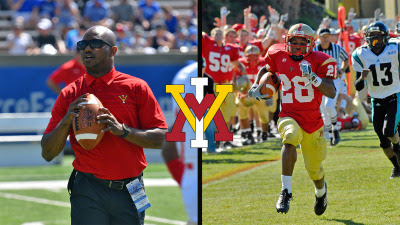 VMI football standout Tim Maypray, who later served on the Keydet football staff as an assistant coach, died on Tuesday, according to a report from the school’s sports information office.

No cause of death was listed in the report.

He had spent the past season on the staff of Scott Abell at Davidson College as running backs coach after spending three years in the same capacity at VMI under Coach Scott Wachenheim.

“We are deeply saddened to learn of Tim’s passing,” said VMI Athletics Director Dr. Dave Diles.  “Our thoughts, prayers and support go out to Tim’s wife Bianca and their children. I’m certain that the VMI community shares our grief and will join in support of the Maypray family during this most difficult time.”

As a cadet, Maypray garnered numerous awards as a receiver, return specialist, running back, and quarterback at VMI and was named first team All-Big South Conference as a kick returner in 2007 and punt returner in 2009. He was also selected second team All-Big South at wide receiver in 2007 and quarterback in 2008. Maypray was named Big South Freshman of the Year in 2006 and preseason offensive player of the year in 2009.

In 2010, Maypray received the VMI Intercollegiate Athletics Award which is presented to the most outstanding athlete.

Maypray played professionally for three seasons in the Canadian Football League making his debut for the Montreal Alouettes in their 2010 Grey Cup Championship season.

He is survived by his wife, Bianca, and two children – son Timothy Maypray III, and daughter Madison.

The Davidson College football staff has organized a GoFundMe page in Maypray’s honor to support his family and can be viewed at the link below: