VMI alumnus and all-time leading scorer Reggie Williams is a gold medalist after Team USA captured the FIBA AmeriCup championship with an 81-76 win over Argentina in the tournament final, playedSunday in Cordoba, Argentina. 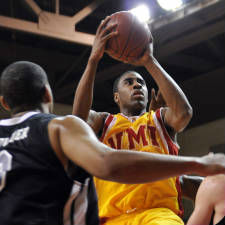 Williams started the game, scored seven points and had three rebounds as his team rallied from a 20-point third-quarter deficit to take the title. He also had a pair of notable other games in the tournament, including 10 points in the semifinals against the US Virgin Islands and 13 markers in his team’s first game, which came against Panama.

Williams was the player with the most NBA experience on the squad, which was chosen primarily from individuals who played last season in the G League (formerly NBDL or D-League).

For more information on the FIBA AmeriCup, please visit usab.com.