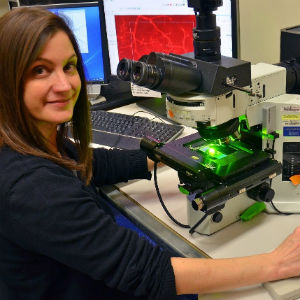 Every year, traumatic brain injury afflicts more than 1.7 million people in the United States and leads to 52,000 deaths, according to the latest figures from the U.S. Centers for Disease Control. Virginia Tech researchers are studying the role of cerebrovascular health in the onset of traumatic brain injury with the hopes of identifying new targets for safe and effective drug therapies.

The National Institutes of Health has awarded a five-year, $1.7 million grant to the team led by Michelle Theus, an assistant professor of molecular and cellular neurobiology at the Virginia-Maryland College of Veterinary Medicine. Her co-investigators are John Chappell, an assistant professor at the Virginia Tech Carilion Research Institute, and Hehuang “David” Xie, a research associate professor at Virginia Tech’s Biocomplexity Institute.

The researchers are focusing on a specialized group of blood vessels called “collaterals,” or natural by-pass vessels in the brain which act as a bridge between major vessel branches, providing an alternative route for blood to flow in the event of a blockage.

“Collateral vessels are normally inactive, or have a zero net flow, but quickly work to re-route blood to vulnerable tissue regions in case of an emergency. This is one of the most important adaptations in the vascular system,” said Theus, who is a faculty member in the Department of Biomedical Sciences and Pathobiology. “The presence of collateral vessels is neither organ nor species dependent. In fact, our work focuses on whether the growth of these specific ‘by-pass’ vessels can be protective in a number of conditions affecting the brain, heart, and peripheral tissue. Results from our studies may, therefore, be widely applicable to a number of disorders involving regulation of vascular function.”

Although the brain accounts for only 2 percent of total body weight, it consumes approximately 20 percent of daily energy intake. This puts the brain at greater risk when blood flow is substantially reduced. Theus and her colleagues are building on earlier research showing that individuals with a higher ‘collateral content’ in the brain recover faster from other forms of brain injury including ischemic stroke.

The number of collaterals vary widely from individual to individual — and from species to species — and is dependent on both genetic and environmental factors, Theus said. Her research has also led to some novel discoveries regarding when and how collaterals form in the brain.

“Collateralization is only half the story,” said Theus, who explained that an individual’s overall health and the ability of their collateral blood vessels to enlarge can significantly impact the restoration of blood flow and tissue viability, while conditions such as diabetes, atherosclerosis, or a weakened immune system can greatly limit collateral function. “Individuals in good health with a good collateral score have been shown to fare quite well and recover better from vascular obstruction. However, this is not always the case. In fact, we are currently investigating several molecules we believe limit their growth potential.”

The researchers are conducting a variety of pharmacological, transgenic, and chimeric studies which are expected to provide  some clues not only about how collaterals develop and enlarge — known as collaterogenesis and arteriogenesis, respectively — but also how best to treat patients following head trauma. Theus is investigating how a family of molecules that guide the development of axons, or nerve fibers, in the brain suppress the formation and function of collateral vessels.

“By targeting this suppressive pathway, we aim to improve the means by which collaterals function in the brain during times of environmental stress such as stroke and head trauma,” Theus said. “This is exciting not only from a basic science perspective but also from a therapeutic standpoint.”

Chappell, an expert on modeling blood vessel development and regrowth after injury, joined the collaboration after Theus approached him to discuss his work.

“We’re looking at how the cells respond to injury and how that might be adjusted,” said Chappell, who is using sophisticated imaging technology to obtain a 3D view of the vascular network surrounding the hippocampus, the portion of the brain responsible for learning and memory.

While Chappell is taking a larger view of the cellular structure, Xie is investigating the genetic landscape regulating collateral vessels and how this might change in response to brain injury.

“I am particularly excited about contributing to her project which seeks to address the molecular mechanism that underlies the active remodeling of collateral vessels in the brain after trauma using transcriptome analysis,” Xie said. “Our two labs have worked closely together for several years on this project, and we have and will continue to produce and analyze brain transcriptome data together.”

Theus said the collaboration between the three Virginia Tech institutions exemplifies the growing university-wide strengths in the adaptive brain, which also aims to bridge human and animal medicine through a One Health approach. The veterinary college represents an important resource for further investigations into the mechanisms underlying acquired, traumatic central nervous system injury as well as a potential means for therapeutic discoveries.