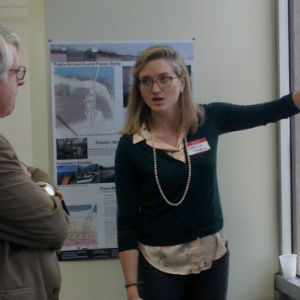 The fact that there is no direct pedestrian connection between the Potomac River waterfront and Rosslyn has puzzled Kris Krider since joining Arlington County as planning supervisor for urban design and research in 2013.

When Steven Cover was named director of the county’s Department of Community Planning, Housing, and Development, he had the same reaction.

“Most cities and counties have recognized the value of their waterfronts as a gathering place but the waterfront below Rosslyn has little pedestrian access and must overcome the barrier of busy highways and large numbers of drivers using the graceful George Washington Memorial Parkway as a commuter route who just whiz by with seemingly no interest in stopping to explore the area,” Krider said.

To generate some creative ideas that could make the waterfront more inviting, Arlington County turned to students at the Virginia Tech Washington-Alexandria Architecture Center.

“We felt they were in a unique position to help us because they could be both imaginative and unconstrained, unworried about ruffling any feathers among the many landowners and agencies in the area,” he said.

Paul Kelsch, associate professor in the Landscape Architecture program, was sure that the mix of graduate and undergraduate students in his spring design studio were up to this challenge.

“I really liked the idea that Arlington County’s urban design team was looking to our students not strictly for a new park at the waterfront, but for really imaginative and transformative ideas,” said Kelsch.

Kelsch and  instructor and Ph.D. student Jodi LaCoe developed three programs the students could choose from as they began to imagine their designs:

The following are a few examples of the designs that Virginia Tech students presented to Arlington County:

In May, the students presented 18 designs to Arlington County staff, residents, agencies, and property owners. In June, their work was put on display at the county administration building for public viewing.

The students’ designs are featured on this Arlington County webpage, which highlights the Virginia Tech-Rosslyn Waterfront project.

“We are very grateful for the opportunity to work with Virginia Tech students,” Krider said. “Limited only by site constraints and their imagination, they had the freedom to create a wide variety of great concepts incorporating emerging best practices and context-sensitive design techniques. They are all worth considering more closely as Arlington works toward a solution for envisioning the Rosslyn waterfront as a regional recreational destination.”