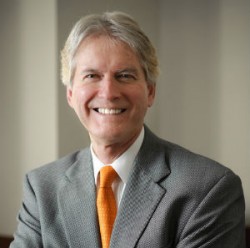 Virginia Tech President Timothy Sands lauded Tillar, a member of the Virginia Tech Class of 1969, for his long career and service to the university.

“In my earliest months here, I learned that Virginia Tech has a unique level of alumni engagement that is off the charts by all of the industry surveys administered by Gallup and others, largely because of a vibrant alumni association that engenders a strong sense of commitment from our alumni,” said Sands. “Clearly, Tom has led that effort for much of his career, and the university has benefited from his leadership in earning the trust, loyalty and support of our alumni.”

“President Sands and I share identical views on the timeliness of adopting the advancement model to strengthen the university through private support and alumni engagement, and I was honored he chose me to help launch this initiative,” said Tillar. “During my 44 year career here, I have had the privilege of working with six visionary presidents, and I could not be more thrilled that Dr. Sands successfully attracted the talent of my good friend Charles Phlegar, whose professional track record is a perfect fit for our new advancement organization.”

In 1971, Tillar began his career at the university in student union and Greek life programming in what is today the Division of Student Affairs. After completing graduate work, he joined the Virginia Tech Alumni Association staff in 1975 working with its chapters, reunions, and annual giving program.

In time, he was named director of alumni relations when a new model for the association configured its staff in an alumni relations department. Also, as secretary-treasurer of the independent alumni association, Tillar serves as an officer of its executive committee and board.

In the mid-1990s, upon the retirement of Vice President for Alumni Relations George E. “Buddy” Russell, Tillar was appointed his successor, and held the position for the next 20 years.

During his career at Virginia Tech, Tillar experienced growth from 40,000 alumni to more than 240,000 today. During that period, the number of active alumni chapters nearly doubled and reunions were expanded beyond traditional class reunions. He created staffing for individual college and constituency programs, and incorporated the student class officer leadership into alumni relations.

In addition, he helped plan, design, and raise funds for the Holtzman Alumni Center which opened in 2005 as part of the new alumni and conference center complex encompassing the Skelton Conference Center and Inn at Virginia Tech.

Under his leadership, an initial “Summer around the Drillfield” program grew into a series of themed events, the “Drillfield Series.”

In an effort to engage more alumni, he was instrumental in the creation of the alumni association’s Multicultural Alumni Advisory Board that oversees several different alumni societies and programming for their constituent interests.

In 2007, then Virginia Tech President Charles Steger appointed Tillar to form and chair a committee to create an April 16 memorial that was built within months on the Drillfield in front of Burruss Hall, and later he assumed responsibility for a liaison initiative serving the families and alumni affected by the tragedy.

In January, Tillar will join the Pamplin College of Business as special assistant to Dean Robert Sumichrast.

“We are thoroughly delighted to have Tom join our team in Pamplin and help us advance several strategic initiatives within our college,” said Sumichrast.

In this capacity Tillar will interact with alumni who are advocates and supporters of its planned residential college referred to as the Business Learning Community, and he also will assist the new Alumni Investor Network tied to innovation and entrepreneurship programs within the college and broader university.