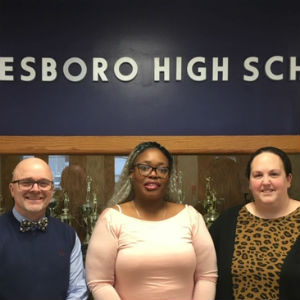 Three members of the Waynesboro School Board announced today their re-election bids for the May 5 municipal elections.

Board Vice Chair Diana Williams is running in Ward A for a full four-year term after winning a special election for her seat in 2018. Williams was appointed by the school board in February of 2017 upon the resignation of Douglas Norcross. She has been vice chair of the board since 2018.

Board Member Erika Smith is running in Ward B for a full four-year term after also winning a special election in 2018. Smith was appointed by the school board in 2017 upon the resignation of Shelly Laurenzo.

Board Chairperson Rick Wheeler is running for the At-Large seat for another four-year term.  Wheeler was first elected to the school board in 2016.  He has been chair of the board since 2018.

Williams and her husband, Clarence, have lived in the Shenandoah Valley since 1997 and the City of Waynesboro since 2011. Their sons completed their K-12 education in Waynesboro –  C.C. is a 2015 graduate of Waynesboro High School, and Christopher graduated May 2017.

Williams is the digital editor and strategist for BackStory, an American history podcast. She brings more than five years of experience in higher education communications with a keen interest in digital presence management to her role. She is a new media professional with a Masters of Arts in journalism and public affairs from American University.

“As a graduate of public schools, I understand that a great public school education provides a solid foundation for all future endeavors,” Williams said. “I will look to ensure that Waynesboro Public Schools continues to attract quality talent, maintain responsible stewardship of resources, and will seek out opportunities to increase educational success. I am grateful to serve the children and families of Waynesboro. It is my plan to continue collaborating with board colleagues and the community. I will work diligently to promote Waynesboro as one of the best cities in Virginia to receive a public education.”

Smith is a Waynesboro native and a 2001 graduate of Stuarts Draft High School. She and her husband, Bryan, were both raised in Augusta County. They have six children, five of whom are in the Waynesboro Public School system – Airelle at Waynesboro High School, Gabriel at Kate Collins Middle School, Levi and Asher at Berkeley Glenn Elementary, and Brooks at the Wayne Hills Pre-K Center. They also have a younger son, Landes.

Smith has been an active volunteer in Waynesboro Public Schools since her daughter started Pre-K in 2006, and has served on Waynesboro Schools’ Talented and Gifted Advisory Board since 2013.

Smith also delivers Meals on Wheels for the Waynesboro Senior Center. Her children are active on local sports teams and she loves to volunteer and cheer them on.

“I am excited to serve the children and families of Waynesboro,” Smith said. “I am dedicated to serving the diverse population in our city and I am committed to ensuring that every child experiences the many opportunities available in our public schools.”

Wheeler is a graduate of Bluefield College, where he earned a bachelor of science degree in physical education with a minor in recreation and religion. He then went on to earn his master of divinity degree from the Baptist Theological Seminary in Richmond.

Wheeler served as a minister for students in various states including Virginia, Alabama, Georgia, Tennessee and West Virginia.

He and his wife, Elizabeth, moved to the Valley in 1995. They have three sons who have either graduated from or are current students in the Waynesboro Public School system. Rick and Elizabeth have been a vital part of the educational, spiritual, physical, social and mental aspects of their sons’ lives, as well as, many children in the Waynesboro community.

“As a husband, father and small business owner in the service industry, I take joy in serving the community and giving back to it,” Wheeler said. “The opportunity of serving on the School Board is just one more way I can serve the community of Waynesboro and make a difference in the lives of students and teachers for the future.”