Gov. Ralph Northam has made appointments for key positions that may impact agriculture.

The Virginia Foundation for Agriculture in the Classroom is celebrating its 25th anniversary this year.

The candidates for governor vowed to support the state’s largest industries during the 2017 Virginia Agriculture and Forestry Gubernatorial Candidates’ Forum.

The nation’s largest agricultural organization is calling an ag education bill before Congress critical for ensuring the industry’s future.

New farmers and ranchers have until the end of June to ensure they are represented in this year’s Census of Agriculture.

Lynchburg area politicians acquired some on-the-farm knowledge May 13 during a tour of three Bedford County farms.

Imagine touring a factory and inspecting the quality of the materials that will be used to build your next car.

Farmers can ensure they are counted in 2017 Census of Agriculture

New farmers and producers who did not receive a 2017 Census of Agriculture survey still have time to ensure they are counted in the next census.

Farm leaders pleased with confirmation of Perdue as agriculture secretary

Former Georgia Gov. Sonny Perdue was confirmed as the 31st secretary of agriculture.

Pass it on: Without agriculture, we’d all starve

Agriculture is sort of a big word but a simple concept: at its heart, agriculture equals food. 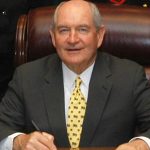 Improvements in the agricultural sector

Farmers have welcomed the appointment of former Georgia Gov. Sonny Perdue as Secretary of Agriculture.

Preliminary work on next census of agriculture begins

The 2017 Census of Agriculture is coming, and farmers are urged to promptly reply to a preliminary letter arriving soon in the mail.

A recent study found that fear-based messaging tactics have led to a decline in produce consumption among low-income shoppers.

Industry strives to attract next generation to agricultural careers

Even though there is a shortage of young people considering careers in agriculture, there are signs more students are pursuing ag education.

Virginia wheat and barley production down in 2016

Virginia farmers harvested 9.28 million bushels of winter wheat during the summer of 2016 according to the USDA National Agricultural Statistics Service.