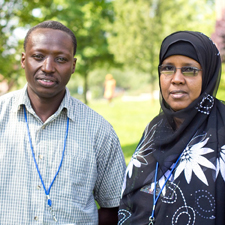 Amina Hassan and Samson Sorobit looked at one another across the room at Park View Mennonite Church with a mixture of surprise and recognition. Could it really be?

In 2008, the two had worked together for several months to resolve an armed conflict between rival clans in Mandera, a region in extreme northeastern Kenya along the Somali and Ethiopian borders. After Sorobit, a major in the Kenyan Army, was redeployed elsewhere that fall, Hassan remained in Mandera to work with the women’s group she founded there. They hadn’t seen each other since.

And then, there they were, reconnecting with shock and surprise halfway around the world at the 2012 Summer Peacebuilding Institute (SPI).

“It was really a blessing to meet him here. I couldn’t believe it,” said Hassan, who has worked as an advocate for women’s empowerment, peace and development in her hometown of Mandera for more than a decade.

“I had no idea she’d be here,” added Sorobit.

Disputes over access to water and pasture are a recurrent source of armed conflict in the arid region surrounding Mandera. With each new outburst of violence, Hassan became increasingly disturbed at the roles women played in the conflict by encouraging their sons and husbands to fight. At the same time, it became clear to her that the burdens of the repeated violence – sorrow, poverty, hunger and instability – were largely borne by women and their children.

In 2000, she founded a group called Women for Peace and Development to address these issues in the region and to advocate for women’s involvement in community decision-making. Hassan’s group is now known as the Horn of Africa Women’s Empowerment Kenya Agency (its acronym means “women” in Somali, the main language spoken in Mandera).

Sorobit arrived in Mandera in early 2008, assigned command of an army unit charged with providing security for civil authorities in the region. He first met Hassan when she asked to speak on behalf of women in the community before the district’s security committee. Afterwards, the two collaborated on several related initiatives to resolve the area’s continuing conflicts. Through her organization, Hassan helped ease tension that existed between the community and Sorobit’s soldiers, resulting in greater trust and more effective collaboration between them. Sorobit also said Hassan played a key role in a disarmament project, one of their successes in Mandera during the brief time they worked together.

“[Our work] was a milestone in creating peace and stability in that region,” Sorobit said.

Sorobit joined the Kenyan military in 1992 and has been deployed throughout Kenya and on peacekeeping assignments in several other African countries. He said his experience in Mandera made clear to him the importance of cooperation with traditional systems, local leaders and civil authorities while on duty in a new region.

Though not attending SPI on official duty with the Kenyan military, Sorobit’s commanding officers are supportive. He plans to apply concepts from SPI – building on his earlier experience in Mandera – to his future assignments, he said.

Hassan hopes the program will provide her with a new academic perspective on peacebuilding to augment her 12 years of practical work in the field. She is one of 12 women who came to SPI as part of the first cohort in the Center for Justice and Peacebuilding’s new Women’s Peacebuilding Leadership Program.