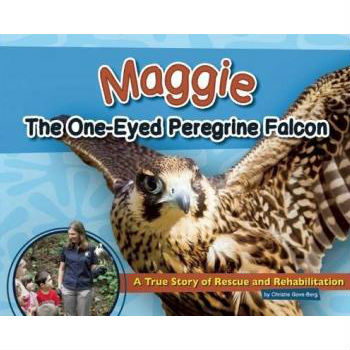 A new children’s book tells the story of Maggie, a Peregrine falcon at the Wildlife Center of Virginia in Waynesboro.

“Maggie the One-Eyed Peregrine Falcon: A True Story of Rescue and Rehabilitation,” written by Christie Gove-Berg is being released this week.

Maggie arrived at the Wildlife Center in 2014 after being hatched atop a bank building in Richmond, where she had become a reality star from her time as an egg because her nest happened to be on a live-streaming webcam.

A few days after her first flight, Maggie crashed into the side of building and seriously injured her eye.  She was brought up to the Wildlife Center.  Despite a valiant effort by the Center’s veterinarians, the falcon’s eye could not be saved and was removed.

As a one-eyed falcon, she could not be released back into the wild. Instead, the falcon has taken on a new career – as anwildlife ambassador for the Wildlife Center.  Named Maggie, in honor of Richmond activist and pioneer Maggie Walker, the falcon is now part of the Center’s outreach team and visits Virginia schools, libraries, and community events.

Copies of the book are available at the Center and available online through the Center’s website at wildlifecenter.org/shop/product/48.

The book is also available from other online book-sellers [Amazon]. The 32-page book is recommended for grade levels preschool through third; ages 4 -8 years.