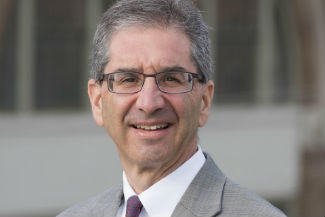 Steven Rosenberg will serve as the City of Staunton’s 16th city manager. Rosenberg was confirmed Thursday to succeed Stephen Owen, who retires June 30 after 12 years in the position.

Rosenberg will assume his new role on July 1, after serving as Staunton’s deputy city manager for the last six years. He brings a total of 29 years of private and public city, county and state government experience to the position.

Rosenberg was one of 32 applicants for the job, which was open to potential candidates nationwide, statewide and regionally on April 1 and closed April 19. Of the 32 applicants, three top candidates – two from Virginia and one from out-of-state – went through a two-day interview process earlier this month. The process included a panel interview with Staunton citizens, a panel interview with City staff, a mock press conference, an interview with city council and a tour of Staunton with a member of the City’s staff.

Mayor Carolyn Dull said Rosenberg’s unique combination of experience and accomplishments, coupled with his knowledge of and passion for Staunton, ultimately set him apart from the other top candidates for the job.

“All of our finalists were very competitive and could bring numerous strengths to the position,” Dull said. “However, it was clear that Steve Rosenberg had the knowledge, skills, and abilities needed to be successful as Staunton’s city manager. Just as important, he loves Staunton and its citizens, and is passionate about our work together.”

As deputy city manager, Rosenberg has been responsible for the direct supervision of eight City departments, as well as the analysis, planning and management of City programs and services. Over the last six years, he has played a guiding role in numerous City initiatives and processes, including:

Rosenberg and his wife, Catherine, settled in the Central Shenandoah Valley 16 years ago and have lived in Staunton for the last five years. He expressed his gratitude for the opportunity to continue to serve the City of Staunton as city manager and cultivate the diverse qualities, initiatives and culture that make Staunton remarkable.

“I am humbled and honored that city council has appointed me city manager,” Rosenberg said. “It is especially meaningful to me to serve the community I already call home in this new capacity. I look forward to joining with the citizens of Staunton, council and staff, as we work together to nurture this special place.”

Rosenberg is also active in the community, serving as a volunteer for Meals on Wheels through the Valley Program for Aging Services and as a member of the Rotary Club of Staunton-Augusta County.

Before joining the City, he worked as an associate general counsel and special assistant attorney general at the University of Virginia for five years. Rosenberg served in local government for 11 years prior to his position at UVA, first as the senior assistant city attorney for the City of Alexandria and then as the county attorney for Augusta County. In these positions, he worked in all facets of local government, including economic development, community planning, parks and recreation, fire and rescue services, transportation, public works and public information. Preceding his local government service, Rosenberg was employed as an attorney at Hazel & Thomas, P.C. in Fairfax.

He has a juris doctor degree from Emory University School of Law and a bachelor of arts degree with concentrations in history and government from The College of William and Mary.