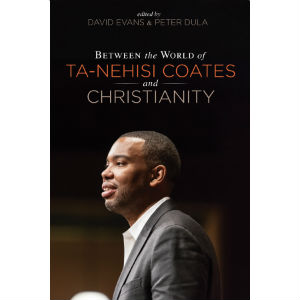 Between the world of Ta-Nehisi Coates and Christianity (Cascade, 2018) includes essays by theologians, ethicists and religious studies scholars responding to Coates’ Between the World and Me (Random House, 2015) on various topics, including hope, fatherhood and whiteness.

In his book, a National Book Award winner and the 2017-18 Common Read at EMU, Coates challenges readers to examine assumptions about race, history, education, faith and social change in a series of letters to his teenage son about his experiences as an African American male.

The book quickly became the topic of discussion across the nation, including a summertime conversation between Dula, department chair and professor of Bible and religion, and Evans, professor of history and mission at Eastern Mennonite Seminary. At that meeting they first discussed the possibility of creating such a volume, the duo recalls in a Wipf and Stock video about the book.

Just months later, Coates tweeted that “the best thing about between the world and me is seeing the engagement from Christians. Serious learning experience for me.” To Dula and Evans, that tweet felt like an invitation.

Although Coates writes in a spiritual way, he is an atheist and has a “reticence to engage fully in any kind of metaphysical reality,” Evans says in the video. “But it’s kind of there and wanting, and so we [Christian scholars] have something to say in the midst of that.”

Coates expresses direct criticisms of Christianity that are “not something that theologians like myself can ignore,” Dula says. For theologians to show a non-defensive eagerness to learn from Coates would be an opportunity to have “potentially really productive conversations.”

Their book, they say, is a model for engaging with Coates, which, as Evans observes, can be no easy task, in part since Coates doesn’t offer hope and comfort.

That, Dula adds, puts him in the company of Biblical prophets.