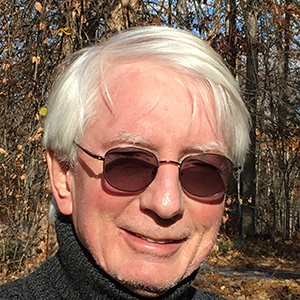 Rod Smith, Washington and Lee University’s writer in residence and editor of the online literary magazine Shenandoah, will present his annual and final reading, before his retirement from W&L in June, on April 3 in Leyburn Library Book Nook at 4:45 p.m.

There will be refreshments and books for sale following the reading. There will also be a limited edition of one of Smith’s poems printed by the W&L Art Department and signed by Smith, available on a first-come-first-serve basis.

Also, between now and June 30 there will be an exhibit display in Leyburn’s main-floor exhibit space. The exhibit highlights Smith’s time as editor, as well as his connections to Ireland and Flannery O’Connor. It also includes past covers of Shenandoah and a few poems.

Both events are free and open to the public.

Smith is the former editor of Southern Humanities Review, as well as former alumni writer in residence at Auburn University. His 14 books of poems include “Messenger” and “Outlaw Style,” both recipients of the Library of Virginia Poetry Book of the Year Award. His stories have appeared in many anthologies, as well as in nine of his own collections. Smith’s collection of poetry, “The Red Wolf: A Dream of Flannery O’Connor,”  received the 2013 Carole Weinstein Poetry Prize.

Smith has served in the capacity of the distinguished visiting professor at VMI, Appalachian State University and Converse College.  He has edited Shenandoah since 1995 and received a 2008 Virginia Governor’s Arts Award for publishing excellence.

Smith’s connection with Flannery O’Connor stems from his childhood. Smith grew up in Griffin, Georgia, less than half an hour from Milledgeville, Georgia, where O’Connor lived most of her life. When he discovered her stories in college, he became a true fan. Throughout his career he has taught a course on her work and wrote a book entitled “The Red Wolf: A Dream of Flannery O’Connor.”

“She’s still in my dreams, her stories always overshadowing mine,” said Smith.

Smith’s Irish connections are derived from his love of Irish writer James Joyce, whom he wrote his thesis about in college. In the late 1980s, Smith traveled to Ireland for a few months and has kept returning ever since. During his travels, he has met many notable Irish figures including John Montague, Mary O’Malley and Michael Higgens (before he was the president of Ireland).  Salmon Press of Ireland published his poetry collection “Split the Lark,” and his book “Trespasser” is set in Ireland.

A music appreciator, Smith also says this about Ireland, “For fiddling, it’s hard to beat western Ireland and central Georgia.”

Following his retirement from W&L, Smith will take on the role of editor for the Timber Ridge Review.  He lives with his wife, the poet and novelist Sarah Kennedy, in the Timber Ridge area of Rockbridge County.

“I am proud to have worked as the editor for Shenandoah, serving readers, as well as new and seasoned writers, by providing a forum for their poems, stories and essays,” said Smith. “I hope our audience enjoyed the gravity, energy and mischief.”