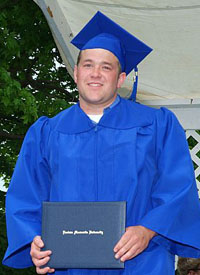 Jason Jay Marner, 22, from Brighton, Iowa, was riding his motorcycle between work sites with his employer, Dynamic Aviation, when he apparently lost control and strayed into the path of an oncoming vehicle on Airport Road.

Marner graduated from EMU May 1 with a bachelor of science degree in business administration. He returned June 18 from a six-week EMU cross-cultural seminar with 15 other students in New Zealand.

Marner was the son of Stan and Joann Marner of Brighton, Iowa. He transferred from Hesston (Kan.) College the fall of 2008 after completing an AA degree in aviation there. He began full-time work at Dynamic Aviation on June 28 where he had served as an intern for the past two years.

He was a 2006 graduate of Iowa Mennonite School, Kalona, and a member of Bethel Mennonite Church, Wayland, Iowa.

“Jason stood out as a student with a lot of promise. He was a good student, who always had a smile on his face, was well liked by peers and faculty, and had a great career ahead of him in aviation management,” said his faculty adviser Anthony (Tony) Smith, associate professor of business and economics at EMU. “We in the department are extremely saddened by this news and want to reach out to his family and friends with our care.”

Persons can respond to Jason’s life and death on a “reflections” blog at http://emu.edu/blog/reflections/jason-marner.