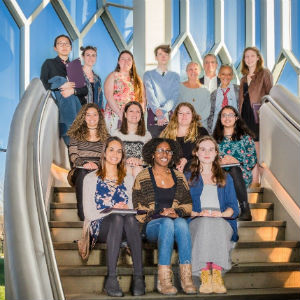 One of the world’s oldest art forms was recently celebrated in one of the most technologically advanced performance spaces, when the ceremony honoring Steger Poetry Prize winners was, for the first time, held in the Cube at the Moss Arts Center.

Now in its 13th year, Virginia Tech’s annual poetry event is held every April, during National Poetry Month. Nikki Giovanni, University Distinguished Professor of English, established the poetry competition for undergraduates and named it for its first benefactor, Charles W. Steger, the university’s president at the time.

Although the event was rechristened the Nikki Giovanni Celebration of Poetry last year, Giovanni has insisted that the Steger Poetry Prize retain its original name, noting, “We had a president who had the vision to say poetry at Virginia Tech is one of the most important things.”

This year’s competition, which garnered more than 100 entries, was so competitive that the judges chose 12 student finalists instead of the usual 10. The finalists represent five colleges across the university, in majors ranging from creative writing to industrial design to animal and poultry sciences.

In her introductory remarks, Giovanni reflected on the inaugural year of the competition.

A range of profound questions were explored throughout the ceremony, as finalists read their entries, alternating with poems chosen and read by Department of English faculty members and invited guests.

This year, Jillian Mouton, of Loudoun County, Virginia — a senior triple majoring in literature and language, creative writing, and professional and technical writing in the College of Liberal Arts and Human Sciences — won the competition for her poem, “Bayeux.”

As first-place winner, Mouton received $1,100, the largest monetary award of any university-sponsored poetry competition in the Western Hemisphere. Mouton also accepted a piece of handcrafted art by local jeweler Faith Capone. Known as “the Steger,” the artwork — a sterling-silver cylinder — has an inset magnifying glass to symbolize the power of poetry to enlarge our understanding of the world.

The second-place, $500 prize was awarded to Katherine Louis, of Norfolk, Virginia, for her poem, “Clouds in the Sky.” Louis is a junior majoring in Spanish in the College of Liberal Arts and Human Sciences.

Shalini Rana, of Vienna, Virginia, a senior double majoring in creative writing and professional and technical writing in the College of Liberal Arts and Human Sciences, won the third-place, $300 prize for her poem, “Scenes/Funeral Day.”

In addition to the winners, nine students received honorable mentions:

The competition is administered by Giovanni; co-directed by Aileen Murphy, a senior instructor, and Joe Scallorns, an advanced instructor, both in the Department of English; and organized and judged by the Steger Committee.

Support for the award competition and the second annual Nikki Giovanni Celebration of Poetry was provided by the Donna and Dennis Treacy Endowment for the Arts, Charles and Janet Steger, the Department of English, A.M. Squires Trust, and Union Bank.