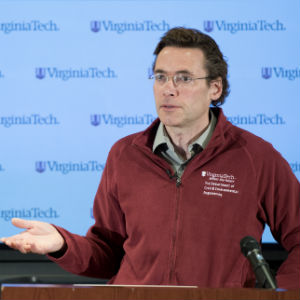 Marc Edwards, University Distinguished Professor and the Charles P. Lunsford Professor in the Charles E. Via Jr. Department of Civil and Environmental Engineering in the College of Engineering, has been awarded the 2018 Scientific Freedom and Responsibility Award by the American Association for the Advancement of Science.

Edwards was recognized by the association for his efforts “to apply his engineering expertise to revealing dangerous levels of lead contamination in water supplies.”

Edwards, a renowned expert in municipal water quality, along with his water study team, conducted an unprecedented independent evaluation of water contamination in Flint, Michigan, residents’ homes that exposed problems with legionella and lead and brought national attention to the crisis.

Caren Cooper, a professor of forestry and environmental resources at North Carolina State University, nominated Edwards for the award. Cooper wrote that Edwards’ research team demonstrated compassion as they worked alongside Flint residents and led efforts “to protect the health, well-being, and future of Flint children and families.”

More than 10 years before testing the water in Flint, Edwards engaged in a decade-long battle to expose health problems associated with lead in Washington, D.C., drinking water and associated agency misconduct. In her nomination statement, Cooper wrote that Edwards has devoted his career to advancing research addressing issues “at the nexus of water-infrastructure-public health.”

Edwards’ role in uncovering the problem has been widely reported by media from around the world, including The New York Times, Smithsonian magazine, Time, The Washington Post, CNN, MSNBC, and Scientific American.

Edwards was named a MacArthur Fellow in 2008. Among his numerous other accolades are the 2010 Praxis Award in Professional Ethics from Villanova University, a 2013 IEEE Carl Barus Award for Outstanding Service in the Public Interest, a 2016 Smithsonian Institution Innovation Award for Social Progress, and the President’s Medal from the American Society of Civil Engineers.

He was named among the most influential people in the world by Fortune, Time, and Politico, and was one of Foreign Policy magazine’s 100 Leading Global Thinkers, all in 2016.

Edwards earned his bachelor’s degree in biophysics from the State University of New York at Buffalo in 1986 and master’s and doctoral degrees in environmental engineering at the University of Washington in 1988 and 1991, respectively. He joined the Virginia Tech community in 1997.