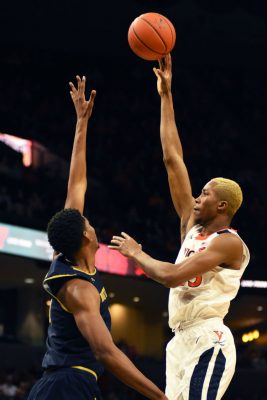 Mamadi Diakite had a game-high 20 points to lead Virginia to a 50-49 win over Notre Dame. Photo by Dan Grogan.

Virginia senior forward Mamadi Diakite was named the ACC Player of the Week on Monday.

The native of Conakry, Guinea, scored the game-tying bucket with 25.1 seconds remaining en route to an ACC-high 20 points along with five rebounds as the Cavaliers held off Notre Dame Tuesday. He added 15 points and four rebounds Saturday as Virginia posted back-to-back wins at North Carolina for the first time in school history.

Miami guard Isaiah Wong was named ACC Freshman of the Week after averaging 17.0 points, 4.5 rebounds and 3.0 assists as Miami scored a pair of wins by double figures, 85-58 over Boston College and 71-54 over Wake Forest.

Wong led the team or tied for the lead in scoring in both victories. A native of Piscataway, New Jersey, Wong became the first Hurricane freshman with back-to-back 20-point games (21 vs. BC after 23 at FSU last week) since January 2001 and helped Miami to back-to-back ACC wins by double digits for the first time since January 2016.