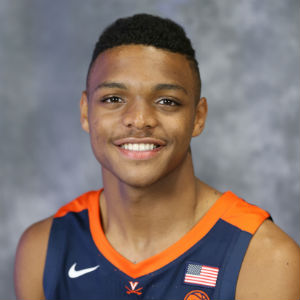 I wrote earlier in the week about getting to JPJ super-early for the late tip for Notre Dame, and seeing Casey Morsell out roughly three hours ahead of the game to work on his shot.

And specifically, squeezing off jumper after jumper with an overdone high arc.

My analysis, expert that I am, of the freshman’s shooting woes had the issue being the flat trajectory of his jumper, so, seeing him trying to add arc made sense.

Morsell had a modest bump in the Notre Dame game, hitting 2-of-5 from the field, one make a 17-foot jumper, the other a contested three.

Saturday in the win over UNC, Morsell was 4-of-6 from the floor, including 2-of-2 from three.

And one of the threes was a catch-and-shoot off a Mamadi Diakite down screen that you would not have seen Morsell even squeeze off a couple of games ago.

I think we got us another dude here.

I’ve been slurping some Woldetensae across the spectrum tonight, but it bears repeating: dude is 20-of-34 from three in his last three road games.

Somebody rent the guy an apartment in Richmond, make him drive to the home games, from here on out.

Good news: Greensboro and wherever we play in the NCAA Tournament, nowhere near JPJ.

He also had 10 points, nine assists, including the dish on the game-winner from Woldetensae.

And: he was the guy holding UNC freshman Cole Anthony to 1-of-6 shooting in the final 8:11, and that make was the sloppest of slop shots.

Saturday night, he was Da Man.

Diakite had 15 on 6-of-10 shooting, including an and-one in the final minute, game tied.

He only had four rebounds, which is a concern, but you have to like what he gave Virginia on offense.

Jay Huff was what Jay Huff can sometimes be. Kid is Mike Tobey 2.0: talented as all get-out, but unable to demonstrate what he can do consistently because he’s not a red-ass.

Braxton Key, I assumed, would step out of the shadow of De’Andre Hunter and be, maybe not Dre 2.0, but close to it.

Virginia isn’t going to win many road ACC games with those guys giving you four points on 2-of-9 shooting with seven rebounds in 45 minutes.

Hard to imagine that this year’s Virginia team can beat anybody with those two giving you that.

They’re two of the Big Four.

They made an aggregate two shots, had seven points between them.

I have to admit, I had no idea each got 18 minutes of floor time.

Caffaro chipped in with four points and solid interior D when Huff relegated himself to the bench first with foul trouble, then with just dispirited play.

Stattmann was the last guard off the bench, but his minutes coincided with the ineffectiveness of Key, who got 24 minutes, and not because he was in foul trouble.

Stattmann hit an open three, had an assist, and also gritted out four rebounds.

Good, important, work from both.