Let the sun shine in: Solar project powers up EMU 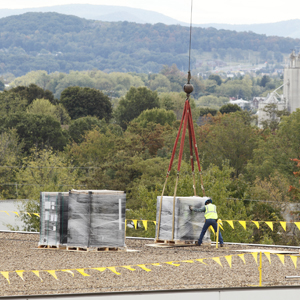 The largest deployment of solar power in the state of Virginia is about to come online at Eastern Mennonite University in Harrisonburg, and that’s just the start of what they have planned up at EMU.

“Colleges and universities across the state are watching us to see how this works out,” said Tony Smith, the CEO of the Staunton-based Secure Futures LLC, which is partnering with the school on the project.

Solar panels being put in place on the roof of the Sadie Hartzler Library will have the capacity to generate 104.3 kilowatts of electricity, with enough power to supply the total average annual electricity costs for nine homes in Harrisonburg. Plans are already in place to install a second array on a structure planned on the North Commons parking lot that will be three times larger than the installation on the library with a signature design featuring solar canopies that will support the panels and also provide the dual benefit of solar shading and solar electricity for cars.

Read the rest of this story on TheNewDominion.com.