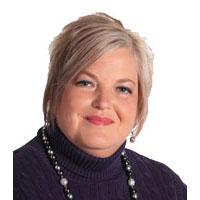 Teresa Gauldin is blazing a new trail for women in business. Gauldin has been named president of the Waynesboro-based Legacy Group Holding Corporation, a conglomerate of construction businesses including Mathers Construction Team, March Excavating LLC and Augusta Erectors Inc.

Gauldin, who had most recently served as president of Augusta Erectors Inc., and will assume the same role at Mathers Construction Team, is a rarity in the construction industry as a female president.

“I do not think I have to prove myself to our associates or customers,” said Gauldin, a mother of three – Mary, a social worker, and Ashley and David, both students at Eastern Mennonite University.

She has been busy in recent weeks familiarizing herself with the different parts of the business. She had been at AEI for a total of eight years in a management capacity, the last two as its president.

“I’m visiting to the job sites on a weekly basis. I need to develop a better understanding of our customer base and our field associates, and that’s the best way to learn, to see it up close for yourself,” Gauldin said.

Her job as the leader of the Legacy Team is to “be the glue,” she said.

“I keep everybody together, keep everybody heading in the same direction,” said Gauldin, whose management style is to keep her focus on day-to-day support of team leaders and to allow her project managers keep their focus on what they need to do to get their jobs done.

Gauldin’s most noticeable imprint on the business is in her push to get Mathers to return to its local roots. The company was founded in 1948 in Waynesboro, and Gauldin wants the company to refocus its efforts on being “your local hometown contractor.”