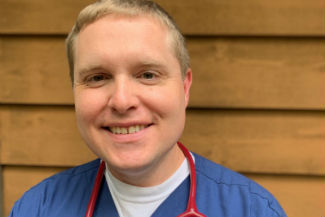 Kellen Squire, an emergency department nurse in Charlottesville, and former candidate for the Virginia House of Delegates, announced today his candidacy for lieutenant governor in the 2021 statewide elections.

“This is a seminal time in the Commonwealth of Virginia,” Squire said, “the most consequential election in half a century, and the decisions we make in the next few years will determine the course of the next hundred. From the climate crisis to the looming specter of recession and economic instability; the rising costs of housing and the crushing load of college debt; from healthcare reform to the stunning rise and re-emergence of authoritarianism and white supremacy. We must address these issues if we’re going to continue building a Virginia that works for everyone.”

Squire said while his political inspirations are derived from a mix of candidates past and present, his single-biggest influence was former lieutenant governor and progressive populist Henry Howell (D-Norfolk).

“Henry fought for a fair deal for working Virginians,” Squire said, “a square deal for the middle class, and a new deal for those whose bloodlines weren’t blue.” But most importantly, Squire said, it was Henry’s take on what the office of the Lieutenant Governor represented that. “Henry knew the job of lieutenant governor wasn’t just to twiddle your thumbs, but to use its bully pulpit to fight unapologetically for working Virginia families.”

Squire said his priority would be “pushing relentlessly for forward-thinking, progressive policies that will see Virginia through any challenge ahead.” To this end, Squire said, his website had “more in-depth positions and policy wonk than ever before in Virginia history” and will be continually updated “as we go to every holler and hill, every school and farmhouse, every zip code, and listen to the people- not just wait for their turn to talk, but listen. Really listen. And then take those concerns to Richmond and fight to fix them, once and for all.”

Winning the nomination, Squire said, would “prove anyone can run, and win, at any level. As long as you’re willing to work as hard as you can for the people of the Commonwealth of Virginia, nothing is out of reach.”

Squire noted his experience working in the emergency department in Charlottesville on August 12th, 2017, played a role in his decision to run.

“The rhetoric being spewed so casually in our national politics isn’t a joke,” he said, “it has real consequences, and I refuse to stand by and allow another Virginia community to suffer intimidation, violence, or worse from the ‘very fine people’ who brought terror to the streets of our community in Charlottesville.”

Running for statewide office is demanding, but Squire believes Virginians need a lieutenant governor who understands the challenges they face, because he’s lived those challenges too. “Being a punch-clock warrior, and equal part of a two-income household where we have to make every dollar count, makes running for any political office- much less a statewide one- awfully tough,” Squire said. “My wife and I don’t quite live paycheck to paycheck anymore, but one minor fiscal catastrophe or medical emergency could easily put us back there.” However, Squire noted that he “wouldn’t change that for anything, because it keeps me connected to the same struggles faced by everyday Virginians.” He went on to say his work as a nurse has given him a unique view into the struggles facing working families across the Commonwealth.

“Every single day, nurses feel the impact of a government that doesn’t work for its people,” Squire said, “and this is true of all nurses, but particularly in the ER, which is the final safety net that too many Virginians have to rely on to keep them from hitting rock bottom. I love helping my community in its time of need, but I know that we can’t just be constantly ‘pulling people out of the river’ – we need to go upstream and see who is pushing them in. And I believe that state level government is where I have the chance to make the biggest impact.”

Squire noted that despite needing to start running now, the 2019 legislative elections would occupy the majority of his time this fall, and pledged his campaign would be fully invested in races across Virginia until after the November elections. “If we want to ensure that communities across the Commonwealth have stability in an increasingly unstable time then the House of Delegates and Senate must be priorities this fall.”

Squire lives with his wife, Cari (a former firefighter, EMT, and current nurse) and their three children in Barboursville. When not working, Squire can often be found volunteering with the Remote Area Medical Clinic, assistant coaching for his kids’ youth soccer league, driving the jeep trail to Flagpole Knob, camping in Luray, or fishing at York River State Park.

You can find out more on his website at www.squireforyou.com, o en español a www.squireparati.com.