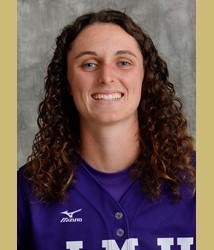 Junior pitcher Jailyn Ford, who is coming off one of the best individual seasons in James Madison softball history a year ago, earned another preseason distinction this week, as she was named an espnW Preseason Second Team All-American.

This comes a week following her being tabbed to the Top 50 “Watch List” for the 2015 USA Softball Collegiate Player of the Year Award.

Last season, Ford became JMU’s first-ever softball All-American after a stellar sophomore season, which led to JMU’s best team finish at 45-15, Colonial Athletic Association regular-season and tournament titles and a berth in the NCAA Tournament for the second straight season.

Ford also hit .268 at the plate with a team-best nine home runs and 26 runs scored. She broke the program record with 34 walks while also hitting nine doubles and stealing nine bases. Aside from being an All-American, she was also recognized as the Virginia Sports Information Directors (VaSID) Player of the Year for the second straight year, named the Eastern College Athletic Conference (ECAC) Pitcher of the Year and earned CAA Pitcher of the Year accolades. She was also tabbed to the NFCA Division I All-Northeast Region First Team.

A total of 24 student-athletes were recognized by espnW and Ford was one of only three players to make the list from a university in a non-power conference. The two others, catcher Lexie Elkins and pitcher Christina Hamilton, both hail from Louisiana-Lafayette.

JMU opens its season Friday, Feb. 13 in Jacksonville, Fla., when it faces Virginia Tech at the Osprey Invitational, hosted by the University of North Florida.