Jim Bishop: Sometimes, the passenger train arrives ahead of schedule 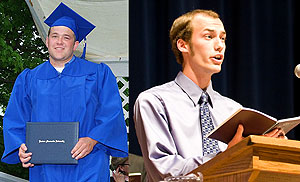 It probably goes without saying, but I’ll say it anyhow – God’s timing and humankind’s timetables are rarely synchronized, or so it seems from an earthly point of view.

Recent case in point: I’m sitting in a hastily-assembled gathering of people on a nearly picture-perfect Jul 1 summer afternoon. None of us desires to be here, at least not for the reason this assembly was called.

The small group came together in Martin Chapel at Eastern Mennonite University to mourn the sudden death of a recent graduate, Jason Jay Marner, 22, of Brighton, Iowa.

Jason had graduated from EMU on May 1 with a degree in business administration and had just started a full-time job on Monday, June 27, at Dynamic Aviation in Bridgewater. Thursday morning of that week, it ended when he lost control of the motorcycle he was riding on Airport Road while en route from one job to another.

As I sat in the chapel, listening to words of scripture and reflections from persons who knew Jason well, it felt like a replay of an excruciating scene from exactly two years earlier – July 1, 2008.

I calculated that while I was sitting in a memorial service at Park View Mennonite Church for Dr. Albert Keim, a much-loved veteran history professor at EMU who died at age 72 of health-related issues, another spring graduate of the university lost his life in a different kind of struggle.

Matt Garber, 22, an honors graduate with a degree in nursing, was on a short-term missions trip in Costa Rica, assisting a family there and working on his Spanish.

Matt, from Elizabethtown, Pa., was swimming with a group of young people in a cove that was not known to be dangerous. A riptide apparently caught several of the swimmers; all but Garber managed to return safely to shore.

Matt’s passing sent shock waves through the EMU community and beyond, especially because he was a well-known student leader who enlivened the campus with his charisma, compassion and keen sense of humor. He was planning to start work in the emergency room at Lancaster (Pa.) General Hospital at summer’s end.

Jason did an internship at Dynamic Aviation in Bridgewater during his junior and senior years at EMU. Having just started working there full time on Monday, June 28, his flight plan lasted less than four days.

I’ve reflected many times these past several days on the meaning of lives cut short in their prime, or so it appears.

It is natural, even appropriate, to ask God “why” when startling events like this turn everyday living on its head. Why do some experience long life, while others are taken so soon? It’s one of the first questions I some day want to ask The Great I Am, the Alpha and the Omega, who knows these things.

But, just maybe, Matt and Jason, and others with similar stories and destinies, had begun much earlier than many of us to give of their best, to share their gifts and leave their mark in making this world a better place for others.

It may not offer much immediate comfort to the families and friends of the deceased, but perhaps this perspective helps in starting to cope with the grief and disbelief that accompanies these perplexing losses and to find meaning in lives cut short.

The untimely deaths of Matt Garber and Jason Marner have caused me to stop in my tracks and acknowledge anew and give thanks for the privilege I’ve had to live and to work for as long as I have. It also prompts this broader question: How am I using my allotted God-given time in my home, in my neighborhood, at my workplace and congregation?

The train appeared to depart for Grand Central Station ahead of schedule for Matt and Jason, but the important thing is, they were ready to climb aboard. I hope and pray that all of us are prepared when that plaintive whistle sounds.