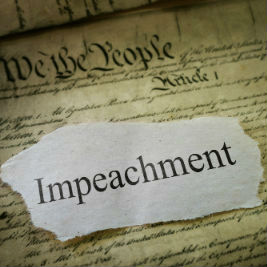 The House of Representatives voted Wednesday night, largely along party lines, to impeach President Trump, the third time in U.S. history that a president has been impeached.

The last time a president was impeached was in 1998, when a Republican-majority House voted to impeach Bill Clinton, a Democrat, who was ultimately acquitted in the Senate.

Andrew Johnson was impeached in 1868 and was acquitted by one vote in the Senate.

Richard Nixon was the subject of an impeachment inquiry, but he resigned in 1974 before the House could vote on formal articles of impeachment.

“Today is a somber day in our nation’s history,” Congressman Donald McEachin, D-Va., said after voting in favor of both articles of impeachment against Trump. “I am saddened that the president’s actions and disregard for our Constitution has led us to this place and time. However, I take very seriously my oath and sacred obligation to uphold the Constitution, and to hold the president accountable for his actions.”

“The president has violated his oath of office and with his actions, demonstrated complete disregard and disdain for our Constitution,” McEachin said. “President Trump abused the power of his office to solicit foreign interference in the 2020 presidential election for personal and political gain, and by doing so, risked the national security of the United States. Then, when faced by a legitimate Congressional inquiry into his actions, President Trump chose to stonewall that inquiry, refuse to cooperate, and instead, mock its legitimacy. If we value our democracy and our Constitution, then we cannot ignore nor justify President Trump’s actions.”

“I am so disappointed that my Republican friends approve the President’s abuses of power and solicitation of foreign interference in our elections. This is the very definition of the willful suspension of disbelief,” Congressman Don Beyer, D-Va., said. “They know in their hearts that what the President has done is deeply wrong. They know that they would vote without hesitation to impeach a Democratic president who had done these things.

“I remind all Americans that the President did not rebut the facts – the many, many facts – which led to these articles of impeachment today. For the sake of our democracy, our Constitution, and our country, we must do the right thing and vote to impeach President Trump,” Beyer said.