Communication is not always easy on Earth, much less in outer space. A group of Virginia Tech students hope to change that.

Seven Hokies spanning a variety of majors – and dubbed the HokieNauts – are among the 12 finalists in a national NASA-sponsored competition to design informational digital displays to fit inside an astronaut’s helmet. The design challenge — NASA Spacesuit User Interface Technologies for Students — calls on student teams to create an information system using Microsoft HoloLens, a software that gives astronauts instructions both audibly and visually. It uses a virtual reality headset and a transparent lens for an augmented reality look, which enhances real-world objects. 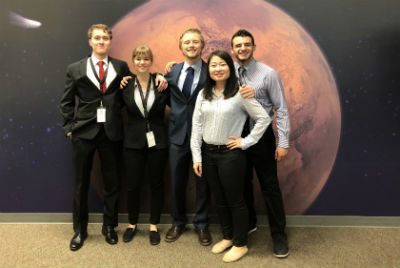 Currently, all communication with an astronaut while on a spacewalk is done by voice with a crew member, according to NASA. But voice commands are not always effective. NASA wants to create helmet-based visual displays for better communication. And it decided to ask college students for some ideas. This is the second year of the challenge.

Wallace Lages, an assistant professor in the creative technologies program in Virginia Tech’s College of Architecture and Urban Studies, found out about the contest last fall and began recruiting students and faculty to join the team. He said the project caught his interest because it involved NASA and could use students with an array of skill sets. The HokieNauts comprise students who are majoring in computer science, graphic design, computer engineering, and creative technologies.

Samat Imamov, who developed the interface for the project, said he joined the group for the opportunity to work with NASA.

“It’s a good resume builder,” said Imamov, a fifth year senior who is majoring in computer science and minoring in music technology. “I had never done anything like this. I had to learn everything from scratch.”

The team had to work fast. Their design was due to NASA in November 2018. They divided themselves into different skill areas, such as graphic design, coding, and 3D rendering. They met weekly as a large group and worked in their individual areas at other times.

Using the HoloLens and information from NASA, the HokieNauts came up with a system that they said was functional and aesthetically effective. The graphic designers focused on the visual elements, incorporating legible white typeface on a light blue background and creating the HokieNauts website.

For the team’s design, astronauts’ instructions show up on the right side of the screen, with a 3D rendering of the task on the left. Once a task is completed, it grays out and moves to the next instruction.

Also, computer engineering student David Haas used 3D modeling software to create a chest piece for the astronauts to wear. They can toggle back and forth to see information in different layouts.

NASA chose the HokieNauts as finalists in December. In April, with the 11 other university finalists, they visited NASA’s Johnson Space Center in Houston to present their ideas, conduct user tests with a space architect (including Brett Montoya, a Virginia Tech graduate), and receive feedback from space experts. Only five students were allowed inside the space center.

“Our team was one of the most, if not the most, art and graphic design heavy,” said Meaghan Dee, an assistant professor of graphic design in the School of Visual Arts and one of the faculty members who worked with the HokieNauts. “I think they came up with a strong solution.”

For Vina Shen, one of the HokieNauts who graduated in May with a bachelor’s degree in graphic design, the project showed her ways that she can apply her education to real life.

“I always wanted to understand human behavior and apply it to design,” she said “This was a perfect opportunity for me to do so.”

Finalized designs are due to NASA this month.

“NASA reserves the right to use anything we’ve come up with,” Dee said.

The HokieNauts aren’t taking off anytime soon. The team hopes to participate in the next year’s NASA SUITS competition. They already are recruiting new members to fill open slots.