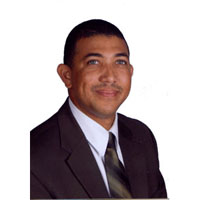 Harrisonburg educator Luke A. Hartman has been named vice president for enrollment at Eastern Mennonite University. He will assume his new role Aug. 1, 2011.

In his new role, a president’s cabinet-level position, Hartman will oversee the departments of admissions and financial aid. He will also lead student retention activities for the university.

“I am very pleased that Luke is returning to his alma mater in this very important role,” Dr. Swartzendruber said. “His experience as a faculty member, success in recruiting as a coach and understanding of the admissions process will serve us well.”

Hartman has been assistant principal at Skyline Middle School in Harrisonburg since 2008. Before this, he was a behavioral consultant for Harrisonburg City Public Schools two years. He taught two years in EMU’s teacher education department and has also been a graduate instructor for EMU’s masters in education program in Harrisonburg and in Lancaster, Pa., since 2000.

Before returning to Harrisonburg, Hartman was associate director of admissions at Hesston College, 1999-2004, and men’s varsity basketball coach there, 1996-2004. He chaired the Hesston College faculty in 2001 and taught in the education department there eight years. He currently serves on the Hesston College board of overseers.

He earned an AA degree from Hesston College, a BS degree in liberal arts with endorsement in special education from EMU, an MEd degree from Wichita State University with emphasis in mild handicapping conditions and is currently completing a PhD program in educational leadership and policy studies at Virginia Tech.

Hartman is a popular public speaker at youth rallies, spiritual life week events and church retreats. He was keynote speaker for National Mennonite Youth Conventions held in 2003, 2005 and 2007. He has directed or been major lecturer at basketball camps and coaching clinics from 1991 to the present.

He is a member of Lindale Mennonite Church.

Hartman is married to Staci Kauffman Hartman, a 1993 EMU graduate. She is a reading coach at Spotswood Elementary School, Harrisonburg. Their children are Sarina, 16; Sophia, 13; and Sarah, 8.