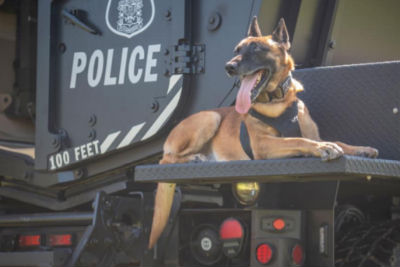 The Harrisonburg Police Department’s K9 Max is retiring after nine years of service.

Max is a 10-year-old Belgian Malinois who is certified in patrol tactics and narcotic detection and will remain with his handler, Officer Bradley Boyce, after his final shift.

Max will be replaced by Bravo, a 17-month-old German Shepard.

Max leaves behind a legacy that includes numerous drug seizures, criminal apprehensions and the relationships made with the community who have attended one of his many public demonstrations.

Shortly before his retirement, Max was involved in one of the largest drug busts in his career. That bust yielded 23 pounds of marijuana and just over $23,000.

“Having a K9 retire is no different than having an officer retire. These dogs become part of the team and we become attached to them,” said Lieutenant Carl Cline the HPD Special Operations Commander and K9 Supervisor. “Max has done an outstanding job during his career and he will be well cared for during his retirement years.”

During his career, Max and his handler have conducted over 560 searches, confiscated $97,000 and located over 55 pounds of marijuana.