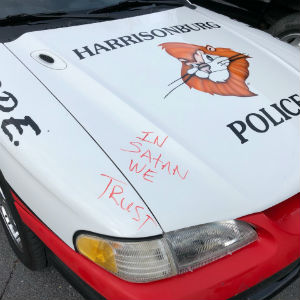 Christopher Parlette, 45, is being held without bond in Rockingham County Regional Jail.

The vandalism came to the attention of police after an HPD officer observed that his patrol vehicle had been vandalized with a red marker while it had been briefly parked behind the police department.

Shortly after the discovery, it was found that multiple police vehicles had similar marks on them.

After further investigation and review of video surveillance footage, a suspect was identified and arrested shortly after. The Harrisonburg Police Department asks that anyone with further information related to this incident please contact (540) 434-4436.