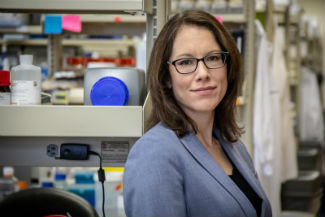 Sharon Swanger, an assistant professor at the Fralin Biomedical Research Institute at VTC’s Center for Neurobiology Research, was recently awarded a $1.7 million grant through the National Institute of Neurological Disorders and Stroke to study glutamate receptor modulation.

Even when our bodies rest, millions of neuronal cells in our brains are active, firing electrical impulses. Most of the time, these signals are elegantly harmonized through circuits composed of many cells.

When disrupted due to disease or brain injury, however, the activity in these circuits can become chaotic. This can lead to epilepsy, psychiatric diseases, or movement disorders, which afflict millions of Americans.

To some scientists, finding cures for these complex diseases starts with examining how the brain processes glutamate, a chemical neurotransmitter molecule used by the brain to convey excitation from one neuron to another. Once glutamate is released, it crosses a synaptic junction between neurons, binding to glutamate receptor subtypes.

“We’ve known for a long time that glutamate receptors in neurons contribute to neurological disease,” said Sharon Swanger, an assistant professor at the Fralin Biomedical Research Institute at VTC’s Center for Neurobiology Research.

Clinical trials have shown that epilepsy therapies designed to inhibit glutamate receptors, while effective at stopping symptoms in some patients, can also produce intolerable side effects. Scientists needed to refine their focus to develop improved therapies targeting the glutamate system.

Since those therapies were developed, neuroscientists have learned a lot about the diversity of neuron receptors, their biological properties, and what tools can be used to regulate them. But there are still unanswered questions about certain glutamate receptor subtypes that Swanger thinks could be the key to developing more effective, targeted, and safer epilepsy treatments.

Over the next five years, funded by the grant, Swanger will examine subtypes within one glutamate receptor family: N-methyl-D-aspartate receptors (NMDAR). In particular, she wants to see if she can modulate the functional behavior of interconnected neurons in the thalamus, a region in the brain involved in seizure generation and where four different NMDAR subtypes are expressed.

“If we can figure out how each subtype functions and modulate select subtypes, then maybe we can target therapies to the circuit where the disease originated while leaving healthy circuits intact,” said Swanger, who is also an assistant professor in the department of biomedical sciences and pathobiology at the Virginia-Maryland College of Veterinary Medicine.

“On a fundamental level, I’m fascinated by how one neuron can receive hundreds or even thousands of different synaptic signals and know how to process them,” said Swanger. “By gaining a deeper understanding of the diversity of synaptic receptors that receive these signals, we’re edging closer to finding treatments for a wide range of neurological diseases.”