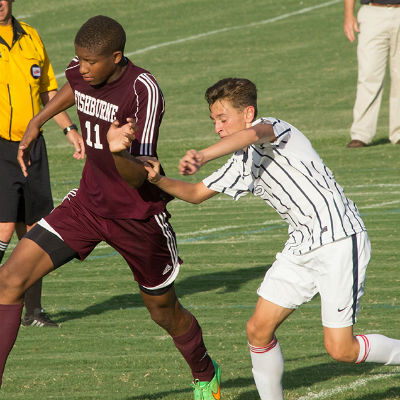 Fishburne Military School senior Baboucar Sallah-Mohammed is a striking presence lining up at wideout on the football field, and he would strike fear in the hearts of opponents on the basketball court.

But Sallah-Mohammed’s heart is in his feet.

“Soccer is my love,” said Sallah-Mohammed, the MaxPreps/NSCAA High School State Player of the Week for the week of Oct. 12-18.

A dual citizen of the United States and Namibia, the 6’4” Sallah-Mohammed was a dominant force on the pitch for Fishburne this season, scoring 20 goals and adding seven assists for the Caissons, who finished their season with a 4-1 loss to Carlisle in the Virginia Independent Conference tournament on Tuesday.

FMS (7-6-1) had made qualifying for the conference tournament a top goal this season after missing out each of the past three years. Sallah-Mohammed’s presence and contributions on and off the pitch were a key factor in this season’s success, Fishburne soccer coach Bryan Greene said.

“Baboucar is an outstanding player. He showed that as soon as he came here to summer school,” Green said. “But he’s more than an athletics star. He’s a great student and all-around great kid. He’s a student leader here because he’s proven himself a good cadet.

“Having someone like that, not only for his skill, but being able to set an example for other players and other cadets, is just tremendous,” Greene said.

Sallah-Mohammed plans to attend Georgetown, continuing his soccer career at the Division I level while also taking pre-med classes.

A career in medicine might have to wait, though.

“My goal is to play professionally in MLS,” said Sallah-Mohammed, who is nothing if not goal-oriented, on the pitch and in life.

A first-year Fishburne cadet, Sallah-Mohammed convinced his parents to enroll him at the military school for his senior year, reasoning that the discipline that is the focus of daily life at the Waynesboro campus would help him later on.

“I really enjoy it here,” Sallah-Mohammed said. “I chose to come here. It’s been everything I wanted it to be, and more, in some aspects. I was promoted to officer in my first year here, so that’s a really big thing. I’m really having fun here.”