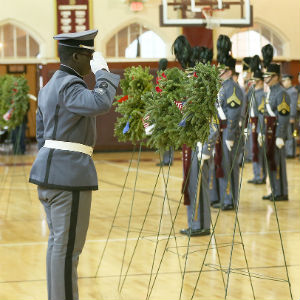 Fishburne Military School will host a Wreaths Across America ceremony to honor America’s veterans on Tuesday.

The ceremony will begin at 2:30pm in Fishburne Military School’s Hitt-Millar Field House and is open to the public.

This will mark the seventh year that Fishburne Military School has been chosen as a location for the ceremony. Wreaths Across America was founded in 2007 as an extension of The Arlington Wreath Project and now boasts over 900 participating locations throughout all 50 states.

What began in 1992 with a trailer load of wreaths, decorated by volunteers and laid at the graves of fallen soldiers in Arlington National Cemetery, has grown into a national organization with the mission to Remember, Honor, and Teach.

The event, which is now recognized by National Wreaths Across America Day, began when Maine’s Worcester Wreath found themselves with a surplus of wreaths nearing the end of the holiday season. Remembering his boyhood experience at Arlington, owner Morrill Worcester realized he had an opportunity to honor our country’s veterans. With the aid of Maine U.S. Sen. Olympia Snowe, arrangements were made for the wreaths to be placed at Arlington in one of the older sections of the cemetery that had been receiving fewer visitors with each passing year.

Twenty-five years later, the event has spread throughout every state in the union and the ceremony hosted at Waynesboro’s Fishburne Military School has become a local holiday favorite.

“Truly understanding and honoring the sacrifices made by the men and women of America’s armed services is vital to our students’ education and personal development. As we enter into the Holiday season, we should all take a moment to pause and give thanks for those who made the ultimate sacrifice so that we may celebrate in peace and security,” noted Fishburne Military School Superintendent, Captain Mark Black, US Navy, retired.