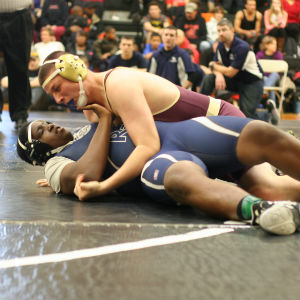 The Fishburne Military School wrestling team opened its 2015-16 season by besting every private school and two public high schools at the eight-team Cody Day Memorial Wrestling Tournament in Chatham on Saturday. The tournament was hosted by Hargrave Military School.

The Caissons sent four wrestlers to the final round, winning three championships at the end of the day. Junior Thomas Fosdick (Staunton, VA) recorded a pin and technical fall en route to the championship round, where he dropped a close 5-3 decision to place 2nd at 120lbs. At 126, sophomore Matthew Farrar (Waynesboro, VA) opened the day with two pins to earn his trip to the finals where he trailed  Parker Martin of Chatham High School 4-0 before roaring back to win  6 -5 to claim the championship. Junior Clayton Berry (Wentzeville, OH), wrestling at 138, opened his Caisson career with the quickest pin of the tournament. He took 12 seconds to fell Davis Eades of Tunstall High School. Berry claimed the championship via injury default.

At heavyweight, senior and second seed Shaheen Alfarhan (Alfaiha, Kuwait) opened with two pins to get to the championship round. When it came time for the heavyweight championship match, the final match of the day, Fishburne trailed Tunstall by 3.5 points in the team standings. The win at heavyweight would secure Fishburne a second place finish. Alfarhan hooked up with number one seed Brandon Hollowell of Dan River High School. Trailing 5-1, Alfarhan battled back to within one point before dominating in the third period and pinning Hollowell to push the Caissons to a 2nd place over all team finish.

In other action, senior Aidan Davis (Pennsboro, WV) opened with a pin at 220lbs. Then, in the most exciting match of the day, he dropped an overtime match to Jacob Stewart of Dan River. Davis rebounded to finish third. Senior Christopher Ross (Alcoa, TN) opened his season with a 2nd period pin, then dropped a semi-final match in the 182lb weight class. He was able to finish third by winning his next two matches. The Caissons had a total team effort, as Adam Bowles (Sewickly, PA), Matthew Sim (Henrico, VA), Hunter Wren-Russ (Calabasas, CA), and Tyler Dolin (Waynesboro, VA) all placed.

Chatham High School won the tournament, followed by Fishburne with 170 points, Tunstall with 165 points and Dan River with 151 points. The Caissons (1-0) travel to East Rockingham on Wednesday.