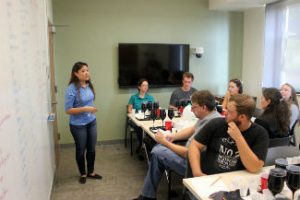 Two Virginia Tech researchers are working on the first-ever formal sensory study on the aging characteristics of American whiskeys in hopes of informing whiskey recipe development and aiding distillers in fine-tuning their aging processes.

American whiskey is one of the fastest growing sectors of the U.S. alcoholic beverage market. Demand for rye whiskey and bourbon has skyrocketed over the past decade. In 2017 alone, U.S. sales increased by $252 million to reach a total of $3.4 billion, according to the Distilled Spirits Council.

Despite its rapidly increasing popularity, a formal sensory study on the aging characteristics of American whiskeys has never been published.

Assistant Professor Jacob Lahne and research associate Katherine Phetxumphou, of Virginia Tech’s Department of Food Science and Technology, are using the department’s Sensory Evaluation Lab to conduct a two-part study on how humans perceive the changes in smell and taste that occur throughout the aging process of different American whiskeys.

“American whiskey is a huge industry, and it has only gotten bigger in the last 10 years,” said Lahne. “But because of U.S. history and the morality that’s attached to distilled spirits, it’s been difficult for anyone to get any grant funding to do that kind of research.”

Whiskey is made by distilling fermented grain mash and then, in the case of many American varieties, left to mature in oak barrels. The flavor of a whiskey is the result of a multitude of processing and ingredient combinations, but many argue the aging process is what gives a whiskey its most notable features. In the absence of outside data, distillers must rely only on internal testing – their own expert noses and palates – to determine how a batch is coming along, and they have limited understanding of how it will be received by consumers.

“Our goal is to conduct a controlled experiment to connect whiskey flavor to sensory outcomes,” Lahne said. “This may ultimately be useful to distillers who are interested in how they can optimize ingredients, processing conditions, and aging to produce particular flavor outcomes, and it may help consumers form more accurate expectations about how particular whiskeys will taste.”

Lahne has long had an academic fascination with American spirits. Though he has published a paper on the flavor chemistry of rye whiskey, he never had a state-of-the-art sensory lab at his disposal that he could use to fill the research gap. After securing a number of differently aged whiskey samples – the source of which remains undisclosed to protect the integrity of the experiment – he enlisted Phetxumphou to plan and administer a classic descriptive analysis study.

Phetxumphou began recruiting volunteers in early October. She assembled a panel of 11 participants who were 21 years of age or older and had a casual enjoyment of whiskey. As is standard in descriptive analysis, this study was broken up into two parts. Part one was consensus training and consisted of 11 one-hour sessions during which subjects would smell and taste whiskey samples of varying ages, spit them out, and then give descriptor words such as “smoky” or “vanilla” to describe the aroma, flavor, and mouthfeel they encountered. Once a list of such words was assembled and agreed upon, the participants were given real examples of what they experienced in the whiskey so as to make certain everyone agreed on the interpretation of the words they chose.

“If they smelled licorice, I provided them with black licorice candy as a reference standard so that everyone on the panel is at a baseline for that particular descriptor,” said Phetxumphou.

Part two is data collection, which will take place over the course of 12 one-hour sessions. The panelists, now trained to recognize the established characteristics of each whiskey, will again sample them and then rate the chosen descriptor words on a 15 point intensity scale. Ideally, all of the panelists will be able to identify the same descriptors in each whiskey and give them similar intensity scores.

Part one of the study wrapped up in early November. Part two will continue through December. The researchers said they aim to have their findings ready for publication by early spring and are excited about the potential applications of their work. Phetxumphou hopes the study can be adapted to benefit the food industry as a whole.

“The methodology that we’re using – descriptive analysis and sensory evaluation in general – is a growing field that’s used prominently in the food industry,” she said. “The whiskey aspect itself may not translate into other food sectors, but the methodology definitely can.”

Lahne has much more local aspirations for who their research will help.