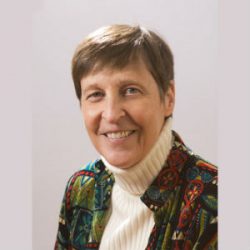 The natural beauty of the Shenandoah Valley will take musical shape in this spring’s premiere of a new four-movement suite composed for and dedicated to the Eastern Mennonite University Chamber Orchestra.

The orchestra’s performance of composer Gwyneth Walker’s “Music of the Land: Portraits of Rural America” will be conducted by EMU music director and professor Joan Griffing during the spring orchestra concert at 7:30 p.m. on March 22, 2018, in Lehman Auditorium, with Walker in attendance.

Walker composed the suite last year after visiting Virginia’s Blue Ridge Mountains. The New England Quaker’s earlier work “About Leaves,” inspired by the poems of Robert Frost, had been heartily received by the EMU community, she said, and she wondered if “something based on Shenandoah-area poetry might not be even more relevant.”

Griffing responded enthusiastically to the idea – Walker’s music is accessible to and loved by listeners and performers alike – and EMU writing professor Marti Eads suggested that Walker use as inspiration the poetry of Robert Morgan, a North Carolinian who writes about rural America.

“So, I followed through,” Walker said.

The performance will include four of Morgan’s poems – “Clogging,” “From the Distance,” “Singing to the Corn,” and “Time Passing” – as read by Roman Miller, a farmer and professor emeritus of biology.

“The poetry speaks of the music heard in everyday, rural life,” Walker writes: “A community clogging dance; the church bells ringing out over the fields in the evening; a farmer ‘singing’ to encourage his crop to grow; and an old family clock, filling the silence with the tempo of time passing. This is the music of the land.”

Griffing said she was “honored” by Walker’s “especially meaningful” dedication of the work to the EMU orchestra. Performing a new work composed for and dedicated to them is an “exciting opportunity” for students, who will receive feedback from the professional composer at the dress rehearsal.

As part of her visit to EMU, Walker will also speak to students in the senior seminar “Peacebuilding in the Arts: Our Stories, Our Selves.”

“She makes a living as a composer,” Griffing said of Walker. “There are not that many people who are able to do that, and so that’s something very unique that she will share about with our students.”