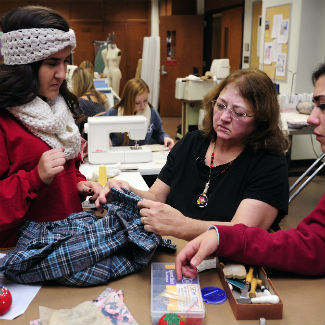 At Friday’s Graduate School Commencement ceremony, Quesenberry will be formally hooded as the recipient of a Ph.D. from the Department of Apparel, Housing, and Resource Management in the College of Liberal Arts and Human Sciences.

Quesenberry came to Virginia Tech in 1987 after more than 16 years in the apparel production industry. She  worked her way up to supervise the cutting and receiving department at Imperial Reading/Healthtex and oversaw quality control, pattern and marker alterations, and receiving and distribution for four U.S. and off-shore manufacturing facilities.

Frequently, Quesenberry was called upon to train new employees, and that’s when she realized how much she enjoyed teaching.

“I relished seeing the look, the gleam in their eyes, when something clicked,” she said, noting that she taught people how to work with and handle new types of fabrics.

Quesenberry had just earned her associate’s degree from New River Community College in industrial and production technology along with a certificate in business and industrial supervision when “I saw the writing on the wall,” she said.

Manufacturing was rapidly being outsourced, so she applied for a lab practitioner and research specialist position in apparel at Virginia Tech. She started her classified staff position in the fall; and the company she worked for closed the following spring.

When Quesenberry learned of the free tuition benefit, she started work on her bachelor’s degree in vocational and technical education, explaining, “I wanted to know how to teach.”

She completed her bachelor’s degree in 1997 and followed that in 2001 “with a master’s degree in education that included project work on lifelong learners, for that certainly described me.”

Still intrigued with education, Quesenberry earned an Ed.S. in 2007, completing a historical study on dislocated apparel workers and the Trade Adjustment Act.

A promise to a sister, a shout-out to grandfathers

“She told me ‘I wanted to do this, but I don’t feel like I have time to finish a Ph.D. You have to promise me you will do it.'”

Peggy Quesenberry agreed but was taken aback by the request. A half-hour later, her sister suffered a seizure that doctors diagnosed as a brain tumor. Patsy passed away seven months later.

On Friday, Peggy Quesenberry will fulfill that promise.

Quesenberry credits both her grandfathers for instilling a love of reading and learning at a young age. She also believes “reports that say keeping your brain cells active will help slow down brain cell deterioration—I am all about that, and all about learning.”

Quesenberry started teaching classes after she received her master’s degree. She has developed courses in computer-aided design, fashion presentation techniques, and the history of costume as an online course. She has taught various classes in apparel production, including “20th Century Designers,”  “Advanced Patternmaking and Grading,” and “Fit, Pattern, Drape.”

“Peggy is able to draw from her past industry experiences in her teaching responsibilities,” said LuAnn Gaskill, a colleague on the apparel faculty. “She has been a great example, a role model really, as she has worked steadily on her own course work through the years. In addition, she has made a point to keep in contact with our graduates via social media, providing our department an excellent resource and contact for alumni.”

Through Facebook, Quesenberry keeps in touch with hundreds of alumni who now hold titles such as buyer, merchandiser, or designer for companies including Tommy Hilfiger, Calvin Klein, Ralph Lauren, Belk, Nordstrom, and Kohl’s.

Note to alumni: Remember that great lab technician or classroom teacher you had? Please note that her new title is Dr. Peggy Quesenberry.