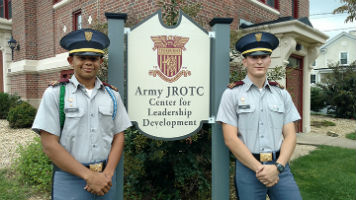 The annual event brings hand-selected students from around the state together for a week-long, intensive session of practical training in the mechanics of citizenship and governance. Those invited must first be nominated by their school officials, then accepted by a local American Legion post before going on for final selection by the event organizers.

Battalion Commander Joseph Jones (South Fulton, Tenn.) and Executive Officer Donald Cravins (Washington, D.C.) were both selected and approved to take part in the June event. Normally, schools are restricted to one representative each; however, when an Augusta County school withdrew their nominee, FMS was offered the unique chance to send two rising seniors to this intensive leadership workshop.

FMS Senior Army Instructor, LTC Robert Hunt, noted that things had to happen quickly in order for FMS’ second participant to attend. “At the time, we had 72 hours to respond and our top choice for that slot [Cadet Cravins] was just finishing up at West Point’s Summer Camp. I contacted his father and we were able to make all the arrangements.”

“I was at the West Point Summer Leadership Experience and we had just finished up a session where we were discussing admissions requirements. We went back to the dorms and I got a call from my Dad, who said, ‘I just got a call from Colonel Hunt and you’re going to Boys State! I’m really proud of you!’ I didn’t know what Boys State was, so I told my roommates I had been selected and they all congratulated me … I had 48 hours in between West Point and Boys State. I didn’t even have to pack my clothes were already packed,” Cravins laughs.

Upon arrival, Cravins quickly learned what the experience was all about. “It was, in a word, fascinating,” he said. “Just think about the concept: you’re telling me that you’ve got a bunch of high schoolers on Radford University’s campus and they’re going to build an entire government in a week…that’s crazy. But it worked and it was fun to participate.”

In terms of prestige, Hunt notes that “many college admissions officers and recruiters, including West Point’s, consider inclusion in Boys State to be almost on a par with earning Eagle Scout when they’re making their selection choices.”

“We couldn’t have picked two young men who were more qualified or enthusiastic,” Hunt says.

Their peers at Boys State seem to have agreed. Cravins was elected to the city council of what would end up being the top-ranked city of the week. Jones was elected as “best citizen” for his city. “To me,” Jones said, “the biggest thing wasn’t winning an award, it was the fact that I wasn’t selected for it, I was voted on by my peers.”

The significance of attending Boys State was also not lost on Jones, whose older brother attended Boys State. “So, I’ve known for a long time now that Boys State is a big deal that means a lot and it’s something where you can go to really learn something new.”

For Cravins, the take-away lesson of the week was a far deeper understanding of the intricacies involved in statesmanship. “Being there and being able to participate in everything and see how it all works, I have a real understanding about how government functions.”

According to the Virginia Boys State website (www.vaboysstate.org) “Each level of government will be run by those delegates who are elected to serve. Instruction will be presented on the law and court system, parliamentary procedure and Virginia political history.” This year, approximately 700 of Virginia’s best and brightest rising high school seniors came together for the 76th session.

Boys State was founded by The American Legion in 1935 as a counter-measure to the rising world-wide tide of Fascism and Nazism. Since then, young leaders have come together annually to form a 51st state…Boys State. In doing so, students are immersed in “the rights and privileges, the duties and the responsibilities of a franchised citizen. The training is objective and practical with city, county and state governments operated by the students elected to the various offices. Activities include legislative sessions, court proceedings, law enforcement presentations, assemblies, bands, chorus and recreational programs.”

Fishburne Military School is the oldest and smallest of all military schools for boys in Virginia. Its college-prep curriculum is built on the structure of an Army JROTC program. FMS has been designated as a JROTC Honor Unit with Distinction and may nominate qualified candidates to the United States Service Academies. Fishburne hosts one of only four Summer JROTC programs in the nation that is accredited by US Army Cadet Command.