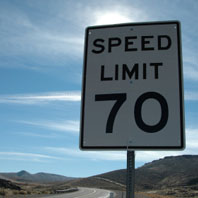 The Virginia Department of Transportation will post 70-mph speed limits on 680 miles of interstates no later than Dec. 31, 2010, Gov. Bob McDonnell announced Wednesday.

While campaigning for governor, McDonnell proposed the speed limit increase to 70 mph in rural and less populated areas as a way to improve transportation in the Commonwealth. This change will result in 61 percent of Virginia’s 1,119 miles of intestates being posted at 70 mph.

“The increase in the speed limit from 65 to 70 mph in rural and less populated areas of the state will help Virginians arrive at their destinations quicker and safer and will speed the delivery of goods and services throughout the commonwealth. This is just one step forward in our efforts to significantly improve Virginia’s transportation system,” McDonnell said.

VDOT outlined to the Commonwealth Transportation Board today at its meeting in Richmond plans to complete the speed limit increases around the state. The change to 70 mph follows the passage of House Bill 856 and Senate Bill 537, which were signed into law by the governor in March. The bills allow VDOT’s commissioner to increase the maximum highway speed limit to 70 mph on certain highways after the completion of a traffic engineering study.

VDOT studied more than 786 miles of interstate highways for potential speed limit changes. Engineers reviewed crash patterns and history, speed data, physical conditions of the roadways and traffic patterns for candidate segments of highway. After input from Virginia State Police, segments that could safely be raised to 70 mph were identified. The speed limits on these segments will be increased to 70 mph in phases, with all changes scheduled to be completed by the end of 2010.

More information and a complete listing of those segments that will change to 70 mph can be found here: http://www.virginiadot.org/news/resources/Statewide/VDOT_FINAL_RECOMM_LISt.pdf

A map of the segments changing to 70mph can be found here: http://www.virginiadot.org/news/resources/Statewide/70MPH_FINAL_RECOMM.pdf.

Speed limit increases are based on findings from engineering studies and needed safety improvements to ensure the safe travel of all motorists. After completion of the studies, engineers determined it best to maintain a speed limit of 65 mph on 189 miles of those segments reviewed. These are primarily in urban areas, areas with high crash histories, or in Virginia’s Highway Safety Corridors.

Additional safety improvements for some segments are also planned for the coming months. These include the installation or upgrade of guardrail, rumble strips and additional signage.

Changing the speed limit to 70 mph will increase motorist safety by allowing traffic to move at a more consistent speed and reducing the conflict between faster and slower-moving traffic. The 70 mph speed limit change will also assist travelers in shortening commute times and will more efficiently move goods and services throughout Virginia.