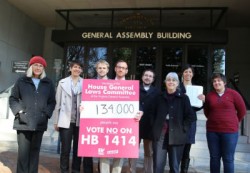 As members of the Virginia’s House of Delegates prepare to hear an anti-LGBT bill,  134,000 All Out members globally including 40,000 in the USA and 7,000 in Virginia have spoken out against the proposed legislation.  Equality Virginia has partnered with All Out, a global movement for love and equality, to deliver the signatures from Virginians in opposition to the proposed bill.

James Parrish, executive director of Equality Virginia delivered the petition to Delegate Todd Gilbert’s office on Tuesday afternoon.  Delegate Gilbert is the chair of the House Committee on General Laws.

“If the proposed anti-gay law passes, it would allow doctors to turn away gay patients.  Movie theaters or restaurants could throw someone out just because they are perceived to be gay,” said Andre Banks, Executive Director of All Out. “This is discrimination, plain and simple.  134,000 All Out members in the state and around the world have spoken out to make sure the Committee takes urgent action to protect the state from this horrific law.  Anti-gay laws have no place in the world and certainly not in Virginia.”

The proposed law, HB 1414, was put forward by Republican delegate Bob Marshall. The bill sets out that lesbian, gay or bisexual people could be legally refused service by a private or public sector organisation because of “religious or moral convictions”. The law would apply to any public or private sector o rganisation certified, licensed, or registered with the Commonwealth of Virginia. This includes doctors, hospitals, schools, lawyers, teachers, bars, shops, hotels, and restaurants.

“This piece of legislation is extremist, hateful, and discriminatory,” said James Parrish, executive director with Equality Virginia.  “Businesses and service agencies that are open to the public should be open to everybody on the same terms, including to LGBT customers and clients. While we all have the freedom to practice the religion of our choosing, we cannot use those beliefs to discriminate against others.  Discrimination is wrong – it’s that simple.   Discrimination under the guise of religious freedom is still discrimination and Virginia is better than that.”

A number of legislators sitting on the House General Laws Committee are in opposition to the bill.

“I stand with many Virginians in support of the LGBT community. The continued advancement of our Commonwealth depends on equal opportunities for success for all citizens. HB 1414 does not help work towards this goal and is a step in the wrong direction,” said Delegate Betsy Carr.

More than a dozen other US states have proposed anti-gay laws that would allow discrimination in the name of “religion or moral convictions”,  Just last month, the Michigan Senate narrowly shut down another dangerous bill that would have given companies the right to say “no gays allowed”.

In Arizona, a bill was proposed to ban transgender people from using restrooms and locker rooms in local businesses. After thousands of All Out members spoke out to local leaders, Arizona’s legislature dropped the bill.

HB 1414 has been assigned to the House Committee on General Laws and could be heard as early as this Thursday.

About All Out: In 76 countries, it is a crime to be gay; in 10 it can cost you your life. All Out is mobilising millions of people and their social networks to build a powerful global movement for love and equality. Our mission is to build a world where no person will have to sacrifice their family or freedom, safety or dignity, because of who they are or who they love.